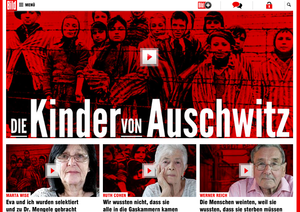 Reporter Hannes Ravic travelled from the US across Europe and Israel to speak with twelve childhood survivors of German’s largest concentration camp. His video project ‘The Children of Auschwitz’ features extensive interviews with the survivors for Bild – a publication that Ravic says “always spends a lot of effort never to forget the Holocaust.”

“What these people have to tell from their memories and their experiences is never out of date and is always important, interesting and worth never being forgotten,” Ravic says.

The project was the 5th most-viewed story for Europe’s 2nd most popular tabloid when it launched recently.

It comes at an interesting time for Germany. A recent survey found a majority of Germans want to ‘leave behind’ the history of the persecution of the Jews, anti-immigration rallies have attracted record numbers, and according to Ravic, Germany faces growing anti-semitism.

“But this story is never over. What these people went through gave them wisdom, and when I asked them what their main wishes were after their experience, they said that first of all they wanted peace; second, respect for different religions and opinions. These people have a different understanding to us because they went through hell, and I think we should follow them.”

On his own experiences leading the project, Ravic says it was the personal stories of the Auschwitz survivors that challenged his understanding of its history. On one survivor’s story of his family’s decision to stay in Germany as the Nazis came to power because of their sick mother, Ravic said: “I never thought of these personal dilemmas – such very private answers about the decision not to emigrate to the US because of family issues changed my perspective about facing these decisions.”

“[I asked] why didn’t you think of leaving Germany?” he says. “They answered: ‘Why would we? At the beginning it was uncomfortable but we never thought of things like that. Germany was a place of intelligence and the centre of civilisation for us – many Jews came to Germany then. It was not a place of antisemitism but of peace, and with its former history nobody could ever think of the possibility of concentration camps and gas chambers.”