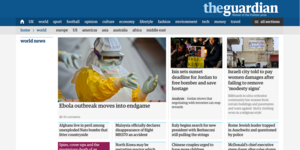 “We were growing tremendously,” says Blau, “Our old site did in fact help us outgrow the New York Times globally, in global desktop rating. [But] when the last site had been built and launched in 2007, not only was our readership much smaller back then, it also didn’t use the web as much as their primary source of news.”

The relaunch is a total ground-up redesign of the site’s architecture made to bring it in line with changed audience and commercial needs.

“Often publishers are being told that you have to embrace a more risk-taking culture, but then there are significant risks involved if you’re not just a start-up which nobody knows or uses yet versus being a publisher with such a long history and a loyal readership. There’s much more to lose, in sympathy from your readership, but also on the revenue side, which often leads to redesigns being no more than that: a repackaging without any consideration of the basic information architecture of the site.”

“What we can say, it’s far too early to judge the success of something but we haven’t seen the slightest dip in traffic, which is still unusual in this industry.”

Blau says when they began to interview readers on how they used the site, they found readers using the site differently to what it was designed for, and that users, especially their most loyal and engaged, were coming to the site for breaking news first, and then for analysis and explanation pieces.

It was these motivations which fuelled the relaunch.

“There are many news organisations who are [either] really good at breaking news, or in-depth journalism, but there are not that many in the world that have the resources to do both. And if you do, the most plausible layout at first sight for a homepage would be a multi-column structure: a news column and a non-news column – the classic newspaper approach.” says Blau.

“And yet what we realised is that such a multi-column approach – while it was technically possible, even in a responsive site – paradoxically serves neither audiences because to get the news agenda, to get that quick glance of what’s happening you already have to start scrolling.”

This was what inspired the Guardian’s new ‘container’ approach to their site, which not only allows around 60 different configurations of that first headlines container alone, but also allows them to slot in and out stories which are more relevant to the reader.

“Of course, we don’t start building a new site starting with the homepage, we start with what is the default homepage for most of us, which are the article pages through which most readers enter the site” says Blau.

When looking at the follow-on reading recommendations most publishers offer in their article pages, Blau thinks they are “fairly crude”, either offering a broad ‘most read’ or ‘most shared’, or something directly related based on narrow keyword-matching.

The container mechanism won’t change how journalists write their stories, says Blau. “The container is a question of presentation of content on destination pages.

“In the article itself, the new container modules or their underlying information architecture don’t dictate the length of articles, they just gives you more flexibility. [They] give you flexibility in your storytelling to curate much more original source material where it can provide context; it also gives you more flexibility in bringing attention to those pieces of related journalism that you as a journalist think are really the most pertinent, and not only what some keyword matching algorithm proposes at the bottom.”

“The new article templates give our journalists more control to say: ‘No really, this is the one piece of analysis that I think you should read if you are interested in this story.’”

“To sum it up”, Blau says, ‘the new site helps to present our strengths in both worlds, fast breaking news as well as the Guardian’s wealth of in-depth journalism, much better and to give our readers a consistent and more pleasant reading and viewing experience, no matter which device they are using.

CORRECTION: This article originally indicated that The Guardian’s redesigned website was built around adapting recommended content according to a reader’s entry point to the site. However, this is not something the site is currently capable of, the modularized structure of article and front pages only lays the groundwork for exploring these abilities later on.