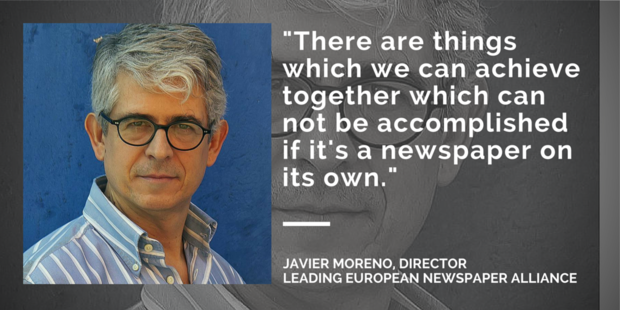 “We can see ourselves as these big newspapers, but we are dwarfs in the 21st century media landscape,” says Javier Moreno, Director of the newly formed LENA, “And it makes sense that we team up together in order to thrive.”

The alliance was born out of a shared desire by each of the newspapers – Die Welt in Germany, Le Figaro in France, La Repubblica in Italy, Le Soir in Belgium, Tages-Anzeiger and Tribune de Genève from Switzerland, and Spain’s El País – to find a way to sustain and improve the quality of journalism across Europe.

“Obviously we all face financial difficulties, and obviously we are all perfectly aware, that to produce this kind of quality journalism we want to sustain in the next years, we have to be able to build new business models. The alliance was formed to help us to build new business models and (it) will support that system,” says Moreno, a former Editor-in-Chief of El Pais.

The Alliance will accomplish this by sharing data, commercial practice and personnel, as well as investing additional resources into dedicated teams for journalism projects and joint digital developments.

Moreno says both joint journalism projects and digital developments are already in the works. In the coming days the seven newspapers plan to simultaneously publish a first example of this joint reporting, marked with LENA branding, and have been meeting with the IT chiefs of each of the newspapers in the alliance to discuss projects.

Additionally, LENA will invest in exploring new ways of improving revenue, says Moreno, “Because in the end quality journalism is expensive, we’re all perfectly aware of it, and we all work for companies which have readers to serve – but also shareholders and [profit and loss] accounts, and they have to be able to turn out the kind of profits needed to support the quality journalism we want to be able to produce.”

LENA is not the first newspaper collective to try collaborating in an effort to sustain business and good journalism, however the extent of the alliance could be a game-changer.

“What’s new [is that] we’re trying to achieve things which would be very difficult for each newspaper to accomplish on its own,” says Moreno, “It’s not easy for a small [or] medium-sized newspaper to get an interview with an international leader, and its much much easier if we pull together, to publish, or we put people from our newspapers to do some research on a subject, and we have resources from our newspapers, and we can produce something of a higher quality.”

Moreno says he can’t imagine why it wouldn’t work elsewhere: “I could see [this] happening in other markets outside Europe or inside Europe. And they might have smaller goals of trying to cope with revenues, or technological developments – but I can see it happening elsewhere.”

As for this particular alliance, Moreno hopes it can be expanded if it is successful.“We’d most welcome a newspaper from the United Kingdom, and another one from the Eastern European countries,” says Moreno, “We’re open to members. We just wanted to launch and prove ourselves and prove to our readers that this can work, and then we’ll see for new members.”