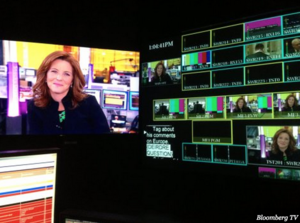 “This coincided with another disturbing trend – while we were certainly successful in recruiting very talented, bright women to our news organisation, the leadership of Bloomberg News was still overwhelmingly male,” Winkler said.

Now Bloomberg’s Editor-in-Chief Emeritus, Winkler had identified the two biggest impediments to gender equality in and through the news in the 21st Century: the paucity of women at the helm and the ‘censorship’ of female sources.

“Five years ago we started looking at this entire issue, not just from an ideological imperative or a social imperative, both of which are valid. We decided to present this issue as an economic & business imperative, in the sense that if we want to be the most successful news organization, if we want to be competitive, then the only way we are going to succeed is if we address the gender imbalance: it’s an economic and business issue,” Winkler told a packed crowd at UN headquarters in New York.

Tackling the gender imbalance – both in the news and behind editors’ desks – requires “…a whole set of policies, prescriptions, targets, goals – like any good business does.” Winkler said.

This is Winkler’s recipe for newsroom transformation as deployed at Bloomberg News:

1) Identify all the women who are influential newsmakers in every field: “We set about in our news judgement trying to determine where are the stories that women might figure in – the stories that are potentially some of the bigger stories of our time.”

2) Insist that there be a woman’s voice in every story: “because if there isn’t a woman’s voice then we are clearly not only discriminating but we were hurting ourselves in our ability to compete.”

3) Set targets every year for increasing women leaders in your newsroom/s: : “If we started at 20%, the next year’s target would be 25%. And if we didn’t meet the target it was clear evidence of failure. It was a business proposition with us and we would suffer the consequences.”

4) Assign mentors/coaches to women on their way up the newsroom management ladder: “We set about finding the best coaches we could find who could mentor the women who were succeeding, so that when they walk in the door every day, they have an understanding of what’s expected of them and they also know that we’re going to make sure that they succeed.”

5) Be flexible with the mothers in your newsroom because when employees have families, “far too often the people most disadvantaged are women.” And recognize that the working day shouldn’t be about 9-5 or 8-6. “I don’t care what clock you punch or when you get to the office. All I care about is the quality of the work. It’s always about the story.”

On the last point, Winkler said the paucity of mothers at the top of the newsroom hierarchy was tackled head on: “What we set out to do is make sure that right at the top of the news organization there are women who have had families, who have been all over the world, whose reporting and editing is distinguished as anyone’s, and that they would be in a position to remind everyone else ‘You can do this too.'”

Bloomberg News still has a long way to go, Winkler admitted, but one of the measures of their early success, he said, is the fact that “most of the headcount at Bloomberg News” now reports to a woman – Senior Executive Editor Laura Zelenko. A former Bloomberg News Eastern Europe correspondent, Winkler made a point of highlighting her qualifications: “Her credentials as a leader are unimpeachable,” he told the panel.

He also pointed to another measurable outcome: the number of female team leaders at Bloomberg News has doubled in the past four years. “It took a lot of attention but it was worth it and the leadership now is balanced to the extent that a woman has most authority over what we cover every day.”

And there have been editorial pay-offs too, Winkler said. For example, the strategy of tracking women leaders in business led to Bloomberg News breaking the story about the appointment of the first woman automobile industry CEO in the world – General Motors’ Mary Barra. “It was an example of where I say paying attention to this gender issue has made us far more competitive than we otherwise would be. We even beat the hometown media in Detroit to the story.”

Winkler emphasised the fact that the Bloomberg News gender transformation project is still a work in progress – but one in which men and women are equal partners. “We have a long way to go but by committing ourselves through policy, and framing the policy as an economic and business decision, this is going to make us a better company, a better news organization, this becomes and issue that has to be embraced not just by women, but by men too because we all benefit from the result.”

Asked by the panel Moderator Annette Young, host of the innovative France 24 program about women newsmakers The 51%  to explain the discrepancy between the number of female journalism school graduates and junior ranked reporters in newsrooms compared to women in news management, Winkler was clear about the cause of the problem: “The issue is insufficient leadership in the newsroom.”.

Hollywood gender and media rights campaigner Geena Davis also addressed the panel, as did Colleen Lowe Morna, Chair of the Global Alliance on Media and Gender (GAMAG), a UNESCO initiative in which WAN-IFRA is a partner. You can watch the whole discussion here.