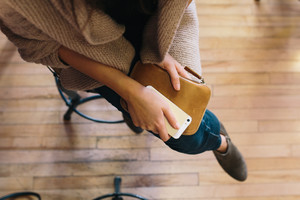 This is what APi’s Rosenstiel learned from the study, and what it means for the future of journalism, as told to Jake Evans:


How millennials are using social media

We can see evidence that people are trying to take command of what they are doing in social media. They’re using it, they’re also feeling used by it, and there’s a sense that they would like to pull back on how much time they spend with Facebook. But they’re not doing it as much as they probably think they are, or would like to. So people are avidly using it, but at the same time they are trying to figure out how to control it and use it more efficiently. That was one thing that was very interesting. The second thing that’s very interesting to me, was how clear the data were that social media actually has a broadening effect on people’s awareness.”

There’s this stereotype that in social media that you just look at the things you’re interested in, there’s a sort of narrowing impact because your friends are off doing things about the party last night or their trip to New York, and there’s photos of that and you just sort of descend further into a funnel.

What we saw very clearly is that it’s almost the opposite, that people go into social media, and they discover things that their friends are interested in and think are important. More and more Facebook and other social networks are a kind of public space where you represent things that are meaningful to you, and as you get older those things tend to be more about the world and less just about yourself – so, as this generation has grown up, social media has changed and become a space for awareness.

Evans: Could the inceasing trend to personalise news feeds and personalise the news threaten the broadening effect of social media?

[It] could, I think that what we also see is a significant effort by people in these spaces to exercise more control, to arrange their feeds in ways that are good for them, so that serendipity will still be there from the feeds of your friends. What’s not clear is whether you’ll arrange them so that you continue to have that discovery.

There’s also what you might call the paradox of personalisation, which is, if you create formulas that are so focused on trying to serve up to people things that you guess they are interested in, it can actually alienate them because it becomes too narrow and repetitious.

We’ve seen this in old media, where TV programs will say: ‘Here’s the formula that gets us the highest rating’ … and what happened was you actually narrowed your audience down, because that was too formulaic, too predictable.

Don’t miss the chance to hear @tbr1 discuss the future of news and tech at #Editors15 http://www.wan-ifra.org/events/67th-world-news-media-congress-22nd-world-editors-forum-25th-world-advertising-forum?view=programme&mode=timetable …

Who sets the news agenda today, media or tech giants?

Facebook tweaks its algorithm constantly. They have lots of data coming in, but you know this is the same as when you are in the news realm, and this is now part of Facebook’s environment, the news defines formula, because the news is what hasn’t happened yet. It’s very hard to say: ‘This is what’s going to interest people next week’, you know, when Ferguson happens, there’s no formula that tells you thats going to be the thing that young people are going to be fascinated by.

Our data from another program shows that when journalists say ‘this is important’ and devote more resources to something, put more enterprise into it, add more elements and photos and sidebars, interactives – that has a big impact on interest. There’s agenda-setting and a large desire on the part of audiences to go deep.

When [audiences] see something that can put a lot of things in context and create meaning for them, that has a big impact.

On the media losing control of the channels of distribution

This is sort of the dilemma of the moment: the internet has increased the demand for news, and mobile has done that significantly, because the news is in our pocket, and if we’re stuck some place and we have five free minutes we will pull out our mobile devices and news consumption is part of what happens during those moments.

But monetizing that news consumption is becoming harder and harder. The audience has migrated to legacy content, to traditional journalism content on digital platforms, but the revenue has not migrated along with the audience – or it has migrated to distribution platforms like Facebook and Google, but not content creators.

This is the core challenge for journalism – and as a consequence, democracy – going into the 21st century: how will we subsidise the creation of civic information that allows people to be free and govern themselves. And it’s pretty much that simple.

Actually the gatekeeper function overted quite a while ago, this is not something that’s happened in the last three or four years, I can go back to the 1980s and 90s, and show you, I mean my first book was in 1992 it was about the rise of cable TV breaking and talk radio breaking the hegemony of newspapers and TV.

What we see now is if you have new information that no one else has, that is significant and meaningful, you create a gate right there – everyone is coming to you and learning about what youve learned.

Politicians often think that media are irrelevant, ‘I can now have my own website and speak to my own followers, I can ignore the press.’ As soon as a news organisation, however, has a story about that scandal, what you’ve done, suddenly the press is a gate that [politicians] absolutely have to walk through.

So you can continue to be a gatekeeper, based not on force but on quality.

But tech companies and their algorithms are not necessarily instilled with the democratic qualities of the press.

This is one of the fascinating things. We see these companies as great and very powerful. In a decade or less, a company can capitalise and become an extremely important insititution financially, economically and even in the social lives of people because of the products they make.

But you have to remember that these are still actually very young companies whose managers have not encountered a lot of ethical challenges over the years; so their cultures may not have ever absorbed: ‘What do we do in these sort of circumstances.’

If you go to a company like the Washington Post, which very much still has in its DNA the embarrassments of the Janet Cooke story that happened in [1981] or other crises … the [publication of] the Pentagon papers from the 1970s [which preceded the Watergate scandal].

So it’s going to be very interesting, as these large institutions in Silicon Valley become not just important gadget makers who create wonderful new things, but they become corporations that are perceived to be too powerful, too dangerous, or could have a huge impact in our lives.

[As a] citizen of the world it’s fascinating to watch. These are almost like celebrity athletes who play for Manchester United or something, and suddenly make 30 million euros a year and are treated like celebrities – but you have to remember they’re actually 24 year old young adults and they haven’t lived through everything, and they’re going to behave like pretty young people.

Concerns for protection of journalist’s sources

Evans: You found in your Millennials study that young people are generally unphased by online spying, either by governments or corporates. This is worrying for journalists who may be protecting anonymous sources.

This is obviously a major issue, and one of my closest and oldest friends in the business, Jim Risen, has pointed out that much of what the world knows about the conduct of the wars in Iraq, in Afghanistan, were things that governments didn’t want people to know. And a lot of significant knowledges are things that the press uncovers against the wishes of powerful institutions, and it’s extremely important that people recognise that.

In the data going back many many years, even as trust in media has declined, we do see that respect for this watchdog role has held up. People don’t like the press but they really do like the press being a watchdog. And that while they dont like the use of anonymous sources, they appreciate it in certain circumstances when there’s no other way to get it.

So they don’t really like anonymous sources in everyday stories where, really, why couldn’t you have quoted this person, you’re protecting somebody – but they understand when you’re talking about government secrets if the story is obviously important and people want to know it, they respect the journalist for telling that story, even if they are not so sure abut the source who was leaking it.

So even the question of: ‘Is Edward Snowden a hero or a treasonous criminal?’ You could answer that question both ways, but say: ‘But I’m glad to know about the government spying.’

Millennials care about the news

There’s an old play in the United States, a musical called Bye Bye Birdie, and there’s a song in it which the parents of the kids – who are fans of a rock and roll star who resembles Elvis Presley – they sing a song that says: ‘Kids, why can’t they be like we were, perfect in every way? What’s the matter with kids today?’

And every generation sort of worries: ‘Uh oh, look what they’re doing, baby boomers, they’re watching all this TV, they’re not listening to the radio like we were or reading books, uh oh.’ So now we have ‘uh oh, Millennials, they spend all their time looking at their stupid phones and being on Facebook.’ Well it turns out whether it’s Bye Bye Birdie, or Hello Facebook, human nature isn’t changed by the technology, the technology is used in a way that can be used to express nature.

And people are curious about the world around them, and this generation is very optimistic, because they feel they’re really into the world, and that’s exciting. And the internet is how they’re doing it, and also how they discover other people.

Every cue about what this first digital generation wants to do with their lives tells you it’s outwardly facing but people are alarmed because they are doing it in a digital way.

Tom Rosenstiel will be appearing at #Editors15: