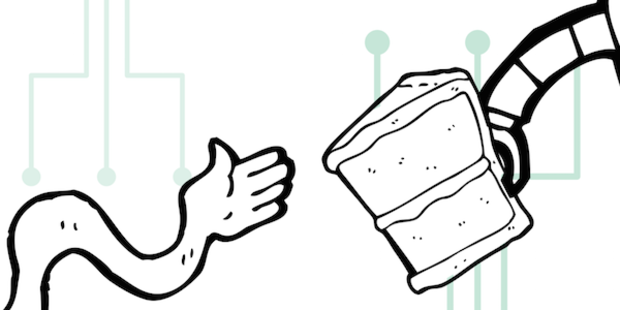 At the frontline of automated reporting, Vice-President and Managing Editor of the Associated Press (AP) Lou Ferrara says the industry is changing rapidly. Ferrara tells the World Editors Forum that they have just hired an Automation Editor, a first for the industry. So, if nothing else, at least one journalist will get a job out of this.

The news from AP last week was that they would also be using automated reporting to cover college sports games that they didn’t previously report.

“If people think this isn’t going to happen quickly – it is,” says Ferrara.

If you don’t believe that the journalism industry and society as a whole are about to face serious change at the hands of automation software, just take the New York Times’ Human or Computer quiz.

Now that you’ve climbed back into your seat from the floor (seriously, that poem was written by a computer?), let’s examine where the industry stands as it is, and how it is poised to affect every newsroom in the business.

The prospect of automated news became more real when the AP announced last July that it would be fully automating its corporate earnings reports. This meant from the sourcing of data to the publishing of a complete story, no human would be involved in the reporting process. A program written by the automation software company Automated Insights would pull data from Zacks Investment Research, sift it for newsworthy information, and then report this information in a way that is indistinguishable from human writing.

The stories that this automated reporting took over were simple, but the impact on the AP newsrooms was huge. The AP’s Ferrara says that not only did this software put out ten times the number of earnings reports for AP than before, but that it also freed up about 20% of his staff’s writing time.

“My staff in general is feeling like: ‘Wow, we have time we didn’t have before – it’s allowed us to do things we weren’t able to before,'” says Ferrara.

This was hailed as the good news story the industry had been desperately waiting for. Automated reporting was “the best thing to happen to journalists in a long time“, wrote New York Magazine’s Kevin Roose.

The reaction to automation developments has been, frankly, “giddy”, and any concern of future job-losses was usually waved away with the reassuring: “Nobody has lost a single job because of us,” in the words of Narrative Science (another automation software company) founder Kristian Hammond.

But despite the generally enthusiastic reception from journalists, critics such as Martin Ford, a leading commentator on job automation, MIT economists Erik Brynjolfsson and Andrew McAfee and, oh, Bill Gates, are worried.

“If you talk to the companies of these technologies – the same is true of companies who make robots – almost without exception they will claim that their technology is not going to displace workers, nobody wants to be accused of that, so they always put a positive spin on it,” says Martin Ford, a Silicon Valley entrepeneur and author of the forthcoming book Rise of the Robots, which details how Artificial Intelligence (AI) is making ‘good jobs’ obsolete – including journalism.

“Usually what they’ll say is this just does the boring stuff and it will free up people to do more interesting things, but realistically you know that that’s just spin. People will lose their jobs and they have lost their jobs already,” says Ford, “[And] things are going to get much much bigger as this technology gets better and better.”

It’s not something the AP’s Lou Ferrara agrees with, since he believes that any work taken from journalists by automation will only give them new opportunities for deeper reporting: “I’ve talked to enough editors and producers and executive producers to know, that if they got rid of certain jobs, they would redeploy those positions into more important positions for the operation,” says Ferrara.

“Maybe it will, in some markets, eliminate some jobs that are no longer needed, the way printing presses changed and pagination changed and digital photography changed things over time in the news business; those jobs did in fact go away. But I would argue that over time the journalism industry creates other jobs of things we need that are frankly of higher value and more important, and I see that here too,” he says.

Catch @LouFerrara at #Editors15 to hear the future of journalism + automation: http://www.wan-ifra.org/events/67th-world-news-media-congress-22nd-world-editors-forum-25th-world-advertising-forum …

This Keynesian long-arc theory (technological unemployment is just a temporary phase of maladjustment) sounds rational, but unfortunately Ford believes that this time it doesn’t apply.

“My general argument is that no that won’t happen, I think we’re really going to have a problem creating enough jobs for everyone.

“This time is definitely different, I believe that we’re looking at something really dramatically different than what we were looking at in the past [industrial and technological revolutions] – but it will take some time to really see that disruption,” says Ford.

“But it’s going to be everywhere, not just in journalism but really in all kinds of white-collar jobs.”

This is not news – as The Economist, MIT and Oxford have all previously noted – and it would be naive to think journalists are immune to automation.

Though Ford is no alarmist. He doesn’t see a “slaughter of all the journalists”. The problem is more subtle:

“I don’t think we’re going to see huge numbers of journalists lose their jobs because of this, but I think that what we’re more likely to see is fewer journalists may be hired in the future, and I think that’s especially true at the entry level.”

“If you want to have a career in journalism and you’re just graduating from school, the place you might start, your first assignment may be one of those routine formulaic things, like sport stories and corporate earnings reports and maybe even obituaries or something like that, you know, those kinds of things where there’s not a lot of creativity to it … that’s been the way that journalists have learned the ropes from the beginning,” says Ford.

“And I think that will at least be the case for now, but then going forward ten years, twenty years from now, who knows. These systems could really become dramatically more capable,” he says

As far back as 2010, automation was taking jobs from young journalists, as Narrative Science software took over the recaps of baseball and softball games for The Big Ten Network – a job previously done by university sports offices.

“No newsroom is saying, you know, I don’t need as many reporters as I have,” Ferrara says. But while a company with the scale of the AP probably won’t be using automated software to save a few seats in the newsroom, Ferrara is convinced that some companies will use software unethically.

“It’s like any technology, some people are going to use it for evil purposes, right: ‘Okay, I’m going to get rid of a hundred jobs by doing this’. But my goal remains to free up time and to free up resources to do the stuff that matters most.”

“The thing that I worry about the most as it relates to journalism is if you give people only what they want to hear, that’s not a good thing for anybody,” says Ferrara. It is something that Slate indicates automated reporting is well positioned to do.

While there’s a fairly clear picture of how automated reporting will affect employment in local newsrooms, it’s less obvious whether automation will add to, or take away from, the nuances of local news.

“I think that [homogenisation of reporting] can happen for sure,” says Ferrara, “Because, and what we’re finding at every sporting event, is that what our customers want is what you didn’t see on Twitter or on TV. They want the news out of the games, the things that happened off the field, or explanation of things that happened on the field that are unique.”

“So yes, there’s a risk of that, but I think that’s up to each organisation to determine what’s important to them and their audience.”

Ferrara makes a good point, that when something does happen, “Generally news organisations go back and do those stories anyway, even if they weren’t there.”

And Ferrara points out that automation of sports reporting means that more games will be covered: “We don’t have the ability to cover minor league baseball in the States with reporters, and there’s interest in it. If we can automate it at a reasonable cost then we think it’s worth doing.”

“Let’s face it, journalists aren’t covering every game in the world in the moment, they’re just not, and so I think automation will work out fine for a lot of places,” Ferrara says.

On a happier note, while automation, especially in its current state, will not free journalists from the constant 24-hour news cycle, Ferrara believes that automation “actually gets us something back.”

“In automating [news] we’re getting out fast and quick with just the facts, the basics, and I think for any news outlet to survive we have to produce content that nobody else has, and in order to do that you need time, and you only get that time by getting rid of the stuff that isn’t high value anymore, and so I look at automation as much more a methodology by which to give people back time to do the stories of higher impact and higher value.”

“I’ve always looked at things that way – I oversee sports, entertainment and business news, and when I got into sports and entertainment, it was not lost on me that sports and entertainment are key news verticals that drive a lot of revenue for companies, and they help feed the larger journalism mission for the AP, there’s no question about that, and I see the same thing here. If this is able to solve problems and make customers happy and feed the larger mission, then that’s success.”

To reiterate Ferrara’s words: “I think it’s a really fascinating time, and the one point I would raise is that if people think this isn’t going to happen quickly – it is.”

“We’re not going to have room anymore to do process-driven things. And we just hired an Automation Editor, who starts in mid-March, the first of its kind in the industry. That person is actually designed to go through the AP and figure out what else we can automate. Because you can imagine after 168 years I’ve got a lot of processes in this place,” Ferrara says. “You’re going to see it more in the core operations of what all newsrooms do.”

“It will dampen down hires in the future, and that’s the interesting part, and that’s the thing that we forget. Whenever I have this discussion about robots and automation, people tend to have this idea that these technologies are going to arrive in huge numbers and people are going to lose their jobs right away. That’s not necessarily going to happen, but if over time we hire fewer people, if fewer jobs are created then in the long run that’s tremendously disruptive.”

“You can’t dismiss the fact that it’s going to be more dramatic as the technology progresses,” says Ford.

Regardless of your position, automated reporting will continue to take a larger slice of the journalism pie.

Lou Ferrara will be appearing at #Editors15: