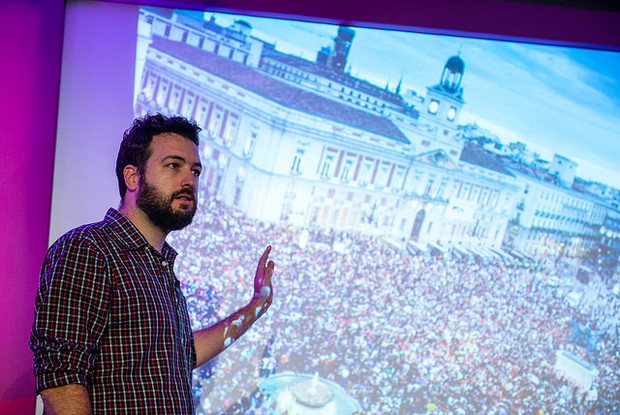 When the first tents in Puerta del Sol square in Madrid were set up on 15 May 2011 to begin a nationwide protest demanding radical change in Spanish politics, journalist Juan Luis Sánchez was there. It didn’t take him long to realise that this demonstration, now well-known as the “15M Movement”, was something different, and especially the stories that were being told there – or more appropriately, the stories that were not being told there.

Some of the key principles that emerged from those months-long protests – honesty, integrity, transparency, community, public service – would go on to mirror those of  eldiario.es, which Sánchez, fellow well-known journalist Ignacio Escolar, and their “friends” would launch in September 2012.

“Traditional media did not know what to do about this movement,” he said. “It was clear ‘on the streets’ that the stories emerging from lawyers, engineers, doctors, journalists, students there were not being told… You also have to understand the perception of traditional journalism in Spain: it is considered the second-worst profession in the country!”


The news site, which focuses on politics, culture, economics and technology, gives new meaning to “starting from scratch” in terms of funding and infrastructure, but Sánchez considers that an asset.

“We didn’t have a huge investment or loans from the bank. We didn’t have a lot of promises or venture capitalists. And that is why we have made it – because we were free of those burdens. We could start with 10-12 people giving 10,000 euros or 12K or 40K.”

.@juanlusanchez says @eldiarioes succeed because they did not have investment or financing, because “we were free from those burdens” #DME15

The site is financially supported by its “friends,” he says, “our readers who give 5 euros a month. Yet all of our content is free to everybody.” The site also contains advertising, but “we decide which advertisers we take on board, and they are not giving us as much money as our members.”

A community network already in place

But make no mistake: In terms of readership, community and networking, the site did not start from scratch. Escolar had been working for Publico, a newspaper that closed shortly after the protests. He had built up a huge following not only at the paper but also on TV and radio, so he was a true media personality. Sánchez became adept at multimedia from his reporting stints in India, Kosovo, Sahara and Turkey, particularly on social media, where he had built up a large following. He is also has a background in human rights, co-founding the digital media outlet “Periodismo Humano”.

Today, the site has more than 10,000 “friends” – “they are not subscribers,” says Sánchez – who also receive a daily newsletter and a quarterly printed product with specialised content. “They don’t pay for reading information. They pay so information can be known.”

Also, he says that within two years of launch, the site became the second-most visited digital-media pure player in Spain.

With community-based journalism as its DNA, the site held meetings in different cities, featuring social debates and discussions.

Sharing financial figures with its audience on a regular basisEldiaro.es takes transparency to a new level, regularly publishing its own financial figures, costs, etc. It also allows civil service organisations, NGOs, etc., to express themselves on the site, Sánchez says. “They are building sub-communities within our community and brand.”

Today the site is growing and has a staff of 35. In addition, independent newsrooms are emerging across the country, with journalists who share the eldiario.es brand and technology but create their own content and raise their own funds.

And Sánchez says the site is considering expansion into Latin America in the next two years.

“At a moment where everything is collapsing in Spain economically, including the news industry… We have managed to do this project of journalism that works so far.”