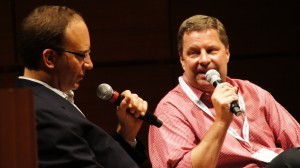 Lu: What’s your view, as Editor-in-Chief of USA Today, of the role that gaming will have in news?

Callaway: I think it really helps people understand the news. It’s another way of telling the story and helping educate, and in some cases, entertain people. It is something we’re doing a lot of at USA Today, we’ve got team in the middle of the newsroom, and basically looks at stories that are being done, that could be done in interesting ways. It’s not just graphics but it’s quizzes, its contests, it’s that type of stuff. It appeals to the younger crowd but it’s also another way of conveying information.

Gannett and USA Today has been an industry leader in relation to virtual reality pieces like Harvest of Change, which explored the stories of generations of an American farm, the Vail Colorado Ski Championships as well as the 360 degree video of the Selma protests. Why are you exploring virtual reality in particular?

Callaway: Video is such a huge component of what all newsrooms are doing now, the ads on video pay higher premiums than the ads on stories so everybody is looking to do new stuff on video and virtual reality is the next component, not just to show the reader what’s happening but to bring the reader there. So it’s a logical step in the progression of newsrooms becoming more video adept.

Virtual reality, historically, can trace its roots back to the 50s, it was quite popular in the 80s, and then it became unviable, investors withdrew in the 90s and its coming through with a renewed popularity, especially with Facebook buying out Oculus Rift, a virtual reality goggle company. What do you make of this new interest in VR?

Callaway: I think it coincides with the interest in video and the technology has gotten to the point where it’s just easier to do. It’s not as limited in terms of who can do it …it will become a major trend next year.

The Oculus Rift goggles are a very limiting factor, most people don’t have them, or have access to them. We’re now taking that beyond Oculus Rift into an experiment with 3D video. I think once it becomes more mainstream people will not only will find more uses for but there’ll be a broader pick up.

I found it quite interesting that Gannett and USA Today are looking into virtual reality since Oculus Rift isn’t available for consumers yet. We saw what happened with Google Glass for example, there was a lot of hype but ultimately they didn’t find a market for it. Is that why you’re exploring 3D instead of limiting yourself to Oculus Rift?

Callaway: Yeah, absolutely. Oculus Rift, it’s not there yet for a broad consumer base neither was Google Glass. Although, I tried Google Glass too and I thought it was cool, but that’s why we’re experimenting with 3D video – so what makes those things cool can be applied in different ways. Nobody has quite yet invented the product which is going to catch on as the iPhone of virtual reality but everyone is looking at different ways to do it. So it’s pretty cool.

PICTURE: David Callaway being interviewed by Gabriel Kahn at the 2014 World Editors Forum

NOTE: David Callaway will speak at the World News Media Congress in Washington DC this June – where Gannett’s VR strategy and USA Today’s experimentation will be discussed in detail.