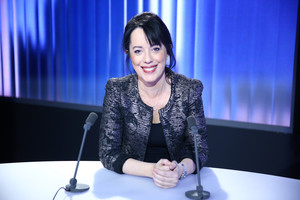 Many editors would argue that gender issues are boring and alienating – hence their frequent exclusion from the news agenda. Why do a news show for a mainstream audience about women?

Young: Simply because gender issues are important and apply  to both MEN and women. Gender equality is equal rights for  all. The challenge for us on the program is to ensure every viewer is engaged regardless of their gender. We apply the same principles of journalism as we would with any story running in any other program. Plus we look for stories that are counter-intuitive; that challenge people to rethink. We also address issues such as how.

Women are in danger of being left behind in the digital revolution; how the gender pay gap continues well into retirement (with women, on average, living on 30 percent less than their male peers), or how the gender revolution is affecting boys’ performances in the classroom. Our tagline should be “making the unfamiliar, familiar.” Be it the woman metro driver in Dubai; the female sumo-wrestlers in Japan; the women-only Sharia Law Unit in Bande Aceh or the neo-feminist who runs the Crazy Horse strip club here in Paris.

What sort of reaction do you experience from the audience to your show’s unashamed promotion of women’s rights?

Young: Incredibly positive. By and large, everybody we speak to is extremely supportive and seems to thoroughly enjoy the program. In fact, the overwhelming comment  is that our duration is too short (we agree!).

What about your colleagues – how do they respond to the show? Is there resentment, intolerance and scepticism? Or have you found support for the program’s attempt  to showcase stories  too often buried at the  back of bulletins?

Young: I have to say that one of the most amazing and incredibly rewarding things about doing the show has been the support from our newsroom colleagues with people regularly coming forward to suggest story ideas, if not offering to do them themselves. And when  I say people, I mean both men and women in equal numbers. The show has created a buzz of its own among newsroom staff with many discussions being prompted by our reports or interviews (particularly on gender pay gap and parental leave!). In addition, a number of stories commissioned by the show have been re-run in our news bulletins. There are a tiny few who still can’t understand why there’s a need for the show. But they are truly in a minority.

From your vantage point, how can newsrooms better tackle the problem of gender imbalance at the top?

Young: Clearly, high-level management needs to do more about the issue. Senior managers need  to target women in the newsroom that they think have the skills to be managers and encourage them to apply for jobs. We know, as women, we can be our own worst enemies. That we won’t stick our hands up for jobs unless we feel 100 percent comfortable in doing so, whereas our male peers will be far more forward, regardless of competence. Many of us also suffer from the “imposter syndrome” – we don’t believe we have the right to be doing the job in the first place. These are the sort of issues that senior management need to be aware of.

I’m not sure about quotas but I do believe in targets. Management should have a series of targets that the newsroom, at all levels, must reflect the diverse nature of their respective populations.

The other big hurdle in our profession is the sheer nature of  what we do – in other words, it’s not family-friendly – especially 24-hour operations. That will take a bit of creative thinking on the part of management and human resources, I agree. Job-sharing is one possibility. But again, it takes commitment and everybody, both employers and employees, stand to benefit. And again, a reminder that parental leave is just that; for both parents, regardless of gender.

How can journalists tell better stories about gender and how can they convince editors to run them?

Young: The same rules should apply as they do to any story; is it of public interest? Does it deserve air-time; to be printed or posted online? But again, it’s about making your colleagues aware. And I am the greatest example of that. When my French colleague first suggested the idea of the program back in early 2013 and talked to me about it, I thought to myself “Yes, I’m a feminist but …” Then, at her prompting, I started reading up and as a journalist, first and foremost, I realised with shame that so many issues affecting women simply don’t get the airtime that they so clearly deserve.

What’s your advice to women ultimately seeking to carve out a career at the top of the news business?

1. It’s ok to be nosy, pushy and bossy. Really it is. If a young man was exhibiting those qualities, he would be described as “highly curious,” “ambitious” and “showing leadership potential.”

2. Keep your eye on the goal; think of what you want to do the most in the industry and just go for it. Also think strategically and do seek out older women for advice. I believe as a senior journalist that’s it my duty to mentor younger people in the game. Given the competitive nature of journalism, it’s not viewed as obvious but for young women, I believe it’s particularly necessary.

3. Keep your sense of humour. Life is just way too short.

Note: This post, which is an excerpt from a feature on newsroom gender equality in the soon to be launched Trends in Newsrooms 2015, is published as part of the World Editors Forum’s #WomenInMedia series, in partnership with the Global Alliance on Media and Gender (GAMAG). Read part one – a profile interview with Philippines editor and CEO Maria Ressa. Author of this post, Julie Posetti, sits on the GAMAG International Steering Committee.