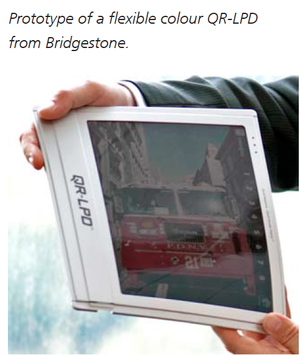 This photo from 2010 looks like a pure marketing mock-up. In fact it shows WAN-IFRA’s Stig Nordqvist in Japan holding up a genuine protoype flexible e-reader. According to Cecilia Campbell‘s report from our eNews executive programme, Bridgestone was “just getting ready to launch” the QR-LPD reader, with Wifi and bluetooth and battery life of a whole week.

So what happened to this wonder technology? When it appeared at trade shows in 2011, it turns out the product itself was a “major disappointment”, secured in a slightly less flexible case, and beset by all the issues that affected first generation e-reader devices, from slow refresh to screen contrast.

Sony’s latest 13.3 inch Digital Paper device from 2014 is a vast improvement, very light and accepting stylus input, but a long way from being rolled up and stowed in a jacket pocket. However, it’s not hard to see a fully flexible mochrome screen being available by 2020. The only question is whether that is too late.

Video in 2010 was our lowest priority

Back in 2010, Bridgestone were keen to ask our group of publishers about their priorities for an e-paper device. 90% thought the ability to read in sunlight was important, alongside power consumption, quick response rate and price. In other words, they were looking for a paper replacement. Video was way down at 15%.

The launch of the iPad a few months later turned that assumption upside-down, and now in 2015, publisher video inventory simply cannot keep up with demand.