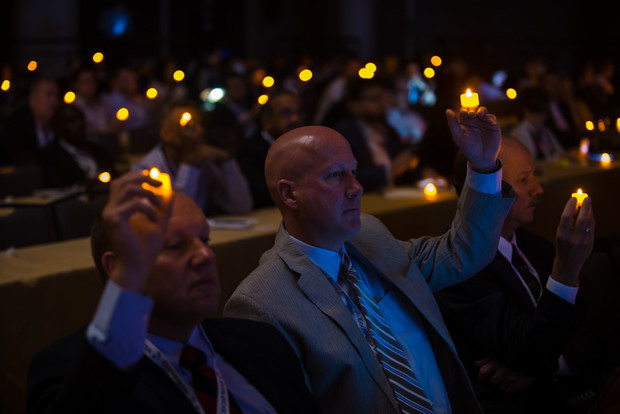 Welcoming delegates from 75 countries, WAN-IFRA President Tomas Brunegård highlighted the perilous situation for press freedom across the globe. “When today we look throughout the world, we cannot jump with excitement and say how wonderful everything has become,” said Brunegård. “Our statistics show that press freedom is at a lower level than it was 10 years ago. Today, only about 20 percent of the world’s population enjoy the level of freedom some of us take for granted.”

Brunegård introduced Ambassador Thomas A. Shannon, Jr., Counsellor of the US Department of State, with a call for the United States to continue to lead by example in defence of human rights despite recent high-profile setbacks. “The United States has long served as the most prominent defender of freedom the world has ever known. But in recent years, national security, the fight against terrorism and other issues have raised concerns about surveillance and whether support for press freedom is eroding. These are not solely domestic concerns. Because of the country’s global role, what happens here has impact on countries everywhere.”

Ambassador Shannon highlighted the indispensible role the press plays in the healthy, functioning of democracy. “A vibrant, free, and independent press is a staple of any open society. We rely on the curiosity and scepticism of reporters, bloggers, broadcasters, and photographers the world over to uncover the truth, underwrite the public trust, and hold us all to account,” he said. “As free societies, we draw our strength from confronting the truth of our own imperfections – by relying on journalists to hold us to the highest aspirations, even when, especially when, we fall short.”

The Ambassador also confirmed that the US will continue to press for the release of Washington Post journalist Jason Rezaian, imprisoned for more than 300 days in Iran. Rezian is currently on trial in Tehran charged with espionage.

However, Washington Post Executive Editor Marty Baron remains extremely concerned that the trial will not be fair and called on Iran to abide by its United Nations obligations. Baron used his on-stage interview with Maria Ressa, CEO and Executive Editor of the Philippines-based Rappler, to call on the industry to petition for Jason Rezaian’s release.

Paying tribute to journalists killed in the line of duty

In a poignant recognition of the sacrifice made by fallen colleagues, the morning session also saw the award of the Golden Pen of Freedom, WAN-IFRA’s annual press freedom award, to ‘Journalists Killed in the Line of Duty’, a moment where the industry stood in solidarity to light 1127 LED candles in honour of friends and colleagues lost since 1992.

“That is why we are here today, to celebrate freedom, and to reaffirm our commitment to all those killed in the line of duty that we will not falter, we will not let their sacrifice be in vain. Our answer will be now and always, to strive for the highest ideals of journalism: to denounce all forms of injustice and thus to contribute to a more peaceful and to a free world.”

Agence France-Presse (AFP) Global Editor-in-Chief, Phil Chetwynd, used his afternoon presentation to call on the industry to support worldwide safety protection standards for freelancers. “The safety of all our staff has never been more important, but also never more challenging to maintain,” Chetwynd revealed. “The issue of safety has never weighed so heavily in the editorial decision-making process.”

Concluding the opening day of the three-day Congress, a session organised in association with The Associated Press titled “Killing the Messenger: What the Media Should Do to Protect Itself and Fight Back” discussed the threats facing journalists working in dangerous environments, and some of the solutions that are available to better protect those in the field.

“One of the aims of efforts to better protect freelancers, for example, is to localise resources for journalists and have them available globally so that security assessments and safety protocols can be achievable,” said Elisa Lees Muñoz, Executive Director of the International Women’s Media Foundation. “It is very important to direct journalists to these resources, and I encourage those of you in this room to do so actively.”

Vivian Salama, Baghdad bureau chief for The AP, highlighted the complexities of not knowing where threats will come from. “In Iraq, for example, we’re facing a situation where the government has no control over large parts of the country. It may not be the state that is coming after journalists, but it may be those who are acting as if they were the state.”

“No story is worth the life of your reporters or correspondents,” said Zaffar Abbas, Editor of Dawn newspaper in Pakistan.

“The threats we face aren’t just bombs and bullets, but also governments, who are imprisoning journalists for their own purposes,” said Douglas Jehl, Foreign Editor at The Washington Post, in reference to the Jason Rezian case.