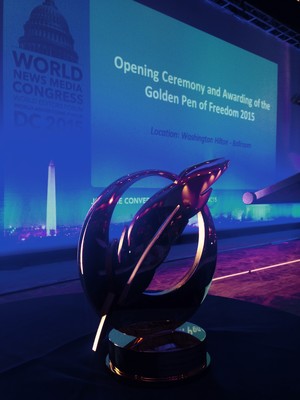 Journalists are strange professionals. We know how our job begins every day but don’t know how it ends, usually not when the clock strikes 5 PM. We struggle to enter remote places where almost everybody wants to leave. We talk even louder when authorities demand we keep silent. And we use words as raw material, but rarely talk among ourselves about the toughest moment in our profession. Today will be one exception.

For over half a century, the Golden Pen of Freedom has been a beam of light that exposes atrocities against the press. Since 1961, this prize has been awarded to dozens of reporters, editors, columnists and publishers who have disappeared, been incarcerated, beaten, threatened or made refugees because they insist on describing the reality around them or on expressing their opinions.

In many cases – we will never know for sure how many – the visibility given by the Golden Pen saved lives, freed prisoners, brought together families torn apart. This sculpture has been awarded collectively on only two occasions: in 1969, to the Czechoslovakian press that resisted the repression against the Prague Spring, and in 2003, to the Association of Belorussian Journalists.

In 2015, the World Editors Forum delivers another collective, and a very special award, in honor of those journalists who gave their lives in the line of duty. Sadly, there are many to be awarded today: since 1992, more than 1,200 journalists have been killed just because they brought the truth to light, or manifested their points of view. Who is responsible for their deaths?  Dictators, death squads, fanatics, terrorists and bandits of all kinds who can’t live with freedom of information or respect opposing opinions.

The tragedy of this massacre is amplified by a staggering statistic: in nine out of 10 murders of journalists the authors remain unpunished. Ultimately, this is the fuel that feeds the slaughter: impunity encourages new crimes, tarnishes the whole society with blood and denies the right every citizen has to a free press.

As a former war correspondent in the Middle East, the Balkans, Africa and Latin America and also being from Brazil, one of the most dangerous countries for journalists, I am especially gratified to be able to bestow this honor on behalf of editors around the world. This award pays homage to the great and heroic reporters that fell in the front lines, killed by gunfire, landmines, explosions, attacks and terror when accomplishing their mission to uncover conflicts, and thus trying to shorten the suffering and the paths to peace. But this award also recognize hundreds of anonymous journalists, many of them killed in the silence of the night, ambushed on a dark street in distant villages in Asia, Africa and Latin America.  As the fallen on every continent, their deaths should never be forgotten, as the martyrs of Charlie Hebdo will not either. This abominable crime drove a stake into the heart of liberty, reminding us that press freedom is a value that must be nurtured every day, wherever we are.

There is no freedom without freedom of expression. And there is no freedom of expression without protection and safety to the practice of journalism. That is why we are here today, to celebrate freedom, and to reaffirm our commitment to all those killed in the line of duty that we will not falter, we will not let their sacrifice be in vain. Our answer will be now and always, to strive for the highest ideals of journalism: to denounce all forms of injustice and thus to contribute to a more peaceful and to a free world.

To family members, friends and peers of the fallen, the news world gathered here says thank you, and reassures its pride and devotion to the profession they so honorably exercised. Our hearts are with you. And our thoughts will be forever with our colleagues whose deaths shine as eternal lights, illuminating the darkness that insists on trying to exterminate freedom.