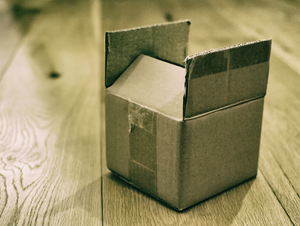 David Frohlich, director of the Digital World Research Centre at the University of Surrey and Professor of Interaction Design, is currently developing an innovative set of ‘Light Tags’ prototypes.

Following in the footsteps of his involvement with interactive newsprint, where he focused mainly on design principles of the product, he is continuing down the path of connecting paper to digital information. With an aim to tackle the technology and produce a range of viable products, he intends to soon allow packaging speak for itself.

“I think that once the enabling of technology matures, there are so many different applications for it,” said Frohlich. Until then, the logistics of embedding chips into paper is just not reliable enough. By switching up the focus to thicker materials, like cardboard, this could potentially bridge that problematic gap.

“We struggled to make robust prototypes that we could trial,” said Frohlich, referring to Interactive Newsprint. “The nearest market I can imagine is packaging.”

Of course, this is augmented packaging. Containers, boxes or sleeves that are capable of playing sound, whether it is reading the contents of a box, listing instructions or suggesting recipes. This is potentially a more accessible route to encouraging interaction with augmented print technology, through commercial products and companies.

“Light Tags is an innovation at the technology level,” said Frohlich. “The project is to try and develop an idea of how to print tags on paper more effectively than you can today, to make them more manufactural.”

Steering away from lab-based projects and only producing small-scale prototypes, Frohlich was determined to start a project which is “closely tied to companies and partly led by the companies’ interests,” with the outlook of producing products on a bigger scale.

With the Interactive Newsprint project, Sandpit focus groups exhibited a lot of curiosity from within the community and how they would like to engage with a new interactive platform. “Those early concepts show how broad the interest was in paper which comes alive or connects with the web in different ways,” explained Frohlich. “The concept brochures which came out of those exercises were very exciting and very interesting.”

Beyond interactive newsprint
Frohlich is currently trying to put together Consumer and Industry focus groups to develop the Light Tags concept further, alongside applying for a patent to protect it. Currently, there are three key concepts that are being developed using this technology. These will be used in demonstrations, shown to possible users and also potential partners to “take forward the technology”.

‘The talking box’ alternative for Ikea flat-pack furniture is one of the key prototypes. It confronts the struggles of deciphering pictographic instructions to assemble furniture, by adding verbal step-by-step commands and additional advice. The first version was solar powered, embedded with a tiny mp3 player and some conductive icons to control each step. It even came complete with a friendly welcome message.

The other prototypes include the ‘collaborative greeting card’ with the capacity to record multiple audio stories or messages, for example, on a leaving card. The other, is the ‘audio-photobook’ which plays soundscapes as you open each page.

The idea is to take products that are either in the packaging or printing market, or in communications channels, inject an interactive twist and release them back out to consumers. Frolich best describes it as a “new technology that’s going to put [these products] on another level”.