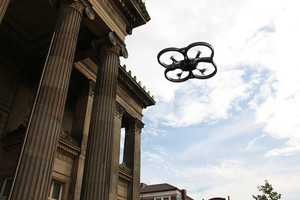 Dickens Onditi Olewe, founder of African SkyCAM, says Africa’s current reaction to UAV operations is to “respond to innovation with fear and shut it down”. The floods in Kenya a couple of years ago were the inspiration behind this project. Through lack of adequate, scalable coverage in the local media, this original drone journalism team focused on storytelling through accurate aerial images. Despite the team producing a number of successful projects, other projects in Africa have been shut down by the government. Anyone now responsible for flying UAVs in Kenya, must report to the Ministry of Defence to address security concerns. Dickens is now looking into ways in which to improve the legal frameworks around drones, making them more responsive.

There are other areas where UAVs have almost free-range to uncover data and information in the name of science. The Antarctic treaty allows scientific investigations to be carried out within its boundaries and for the British Antarctic Survey team, UAVs have simply enhanced their ability to work in such extreme conditions. This being said, there are still a number of bodies which monitor the use of drones and their impact on the environment, and issue permits for their use – making personal use of drones often highly restricted in this environment.

Carl Robinson, Airborne Survey Engineer for the BAS team expressed how the use of UAVs has complemented the resources they already have and have proven themselves to be a much cheaper and less invasive research method. A prominent reason why they are now being used in wildlife conservation projects to put a stop to poaching and for vast mountain rescue operations, like AeroSee.

So where do media organisations or storytelling projects stand in relation to drone-use?

The Daedalus Project is just one example of an outlet for non-linear storytelling, from a different perspective. Just a few months old, this mash-up of collaborators from Abandon Normal Devices, Marshmallow Laser Feast and the University of Salford, aim to heighten audience experience, through the use of drones as a cinematic tool.

There is now a high demand to turn a piece of technology which was originally used by the military, arm it with a camera, and repurpose it to produce aerial images and videos. The Civil Aviation Authority, which is a responsible for the specialist regulating of aviation in the UK, is often seen as a reference point and rather progressive than other nations.

Permits are not necessarily required for piloting UAVs in the UK, unless the drone is been flown for commercial purposes. It is built-up, urban spaces which have stricter regulations in place, insisting that any drone with a camera, must be flown at least 50m from any person or building, as any closer would make it a privacy issue, and three-times as far away from crowded areas for fear of injuring someone.

“Time will tell if drones will reach mass adoption, but if they do, organising the space over our heads is going to become very tricky,” says Andy Miah, chair of Science Communication and Future Media at Salford University and an integral part of the Daedalus Project.

“I think we are likely to see ‘drone free’ air-space rules in many cities,” said Miah. Which is exactly what London’s Royal parks have now instated, banning the use of UAVs in their open spaces, which are already few and far between in large urban cities, like London.

With the use of hexacopters, the BBC has wisely embraced the capabilities of UAVs. They have teamed together aerial shots, mapping overlays and pieces to camera in open environments like heritage sites and to show crowd capacities in countries where UAVs have less restrictions.

Drones are a wonderfully innovative tool for storytelling. When used responsibly and flown without threatening security or safety measures, the results can be visually captivating and inspiring.