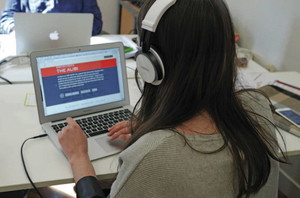 They’re calling it the “Serial effect.” Serial is the phenomenally successful spin-off of This American Life, on US National Public Radio (NPR): a “docutainment” podcast that’s spawned nearly 80 million downloads. That’s right, the latest trend in storytelling is not driven by super innovative technology. It requires no expensive accessories and it’s widely accessible. It’s called LISTENING.

Podcasting, which began a decade ago, liberated radio from the tyranny of the timetable. It has transformed the notoriously ephemeral audio medium into a thriving ecology.

And while the audio revival didn’t commence with Serial, it is the audio storytelling disrupter of the century. The 12-part series blended suspense-style narrative techniques borrowed from TV drama with the intimate power of radio journalism. The result was a serialised story that kept listeners glued to their headphones while making audio hip again.

The work of Sarah Koenig and Julie Snyder, Serial investigated the murder of Baltimore high school student Hae Min Lee in 1999. The teenager’s ex-boyfriend, Adnan Syed, was convicted for the murder. He is still serving a life sentence, on a flimsy conviction, in a US prison.

However, the success of Serial inspired Syed’s supporters in the legal community to produce a follow-up podcast series that launched in April. It’s called Undisclosed: The State v. Adnan Syed, and it “examines and explores the case in greater detail, from an investigatory perspective instead of a narrative one,” The New York Times reported.

Serial became the world’s most popular podcast after securing the title of the fastest podcast to reach 5 million downloads. It offered an in-depth, tantalisingly drawn out rendition of “slow journalism,” proving that quickfire sound grabs and the cacophony of high speed voices populating social media channels and TV news demand an antidote.

In the US, the resurgence in audio’s popularity was kickstarted by two cult shows: This American Life, an hour-long weekly program that delivers three-act personal narratives via its sharp host, Ira Glass; and Radiolab, a show “about curiosity” characterised by micro-produced, fast-paced stories loosely related to science, culture and philosophy. Glass was an editorial advisor on Serial and This American Life recorded audience growth of 25 percent on the back of the Serial wave.

This American Life podcasts attracted huge transnational audiences even pre-Serial: but downloads increased significantly after Serial and they now sit at close to 2 million per episode. As Glass told The Hollywood Reporter, “Serial totally changed the way all of us are seeing possibilities for podcasts.”

One important change is the realisation of a potential business model. This American Life’s podcast ad sales have increased significantly according to Glass, and other podcasters are exploring a combination of ads, subscription and micropayments for value-added content such as archive materials.

In the broader podcast world, where sports, comedy, and talk rate highly, US podcast media advisers such as Rob Greenlee, CEO of Spreaker.com, and Todd Cochrane, CEO of RawVoice, suggest that 5,000 downloads per episode is a minimum required to effectively monetise a podcast.

The raw power of the human voice, the intimacy and conversationality of audio storytelling enthral listeners. From Copenhagen to Chicago, people are gathering in droves for communal audio storytelling events, held in theatres, churches, parks and ironically, cinemas, where foreign language audio is “screened” with English subtitles. From The Moth in New York to Now Hear This in Sydney, people are meeting to share their “emotional histories” in front of a microphone and an audience, with their voices typically their only prop.

Audio worldThere may be a podcasting revolution underway but live radio is still alive and kicking. There are 33,000 radio stations around the world, about 2 billion radio sets in use, or one radio for every 3 people. That translates to 242 million radio listeners in the US.

In the UK, even with podcasting, real time listening is endemic: more than 90 percent of the population tune into a radio station at least once a week, a figure that is actually rising.

In Vietnam, radio reaches over 99 percent of the population, in Kenya 95 percent, while in India, 300 new commercial radio stations compete with the state broadcaster.

What can radio journalism teach us?

Audio storytelling has its roots in oral history – the tradition of sharing cultural meaning by relaying stories about lived experience. The scope of contemporary audio storytelling can range from news reportage and investigative journalism, to intensely personal narratives and poetic or impressionistic treatments of ideas and issues.

These audio stories “colour in” and extend beyond the news agenda, the best examples providing a sort of aural literary journalism whose psychological, philosophical, cultural and political insights transcend national boundaries and connect listeners from around the world.

It’s partly about the temporal nature of sound – unable to jump ahead as in text, or freeze-frame as in film, the listener develops a pact of intimacy with the sound or speaker as the audio unfolds in real time, without visual distractions.

So how can non-radio journalists exploit the power of audio?

Firstly, remember its unique qualities and listen to some great works.

1. Audio conveys EMOTION far better than print. It captures intangible aspects of a story such as a speaker’s mood – their sadness/happiness can be felt. Audio also adds authenticity, as when US broadcaster Studs Terkel interviewed one of the so-called Hiroshima Maidens who survived the atomic blast. It opens his 1961 documentary Born to Live. And who could forget one of the first live to air radio news reports as the Hindenberg blimp crashed to earth ablaze? “Oh, the humanity!” cried Herbert Morrison in 1937

2. Don’t forget audio conveys non-verbal meaning, which can be just as significant as words: don’t edit out a pause, a gulp, a breath. You can listen to an Australian journalist describing how she comforted a dying American soldier who had been blown up by a mine in Vietnam. The combination of her intense emotion and gulping delivery convey the horror of war much more effectively than the same words delivered on the page – both formats were tried.

3. Audio is LESS INTRUSIVE than vision, and therefore lends itself to traumatic stories. It is far less invasive to record someone’s voice than to stick a camera in their face; it allows you to maintain empathy and connection, important considerations that will support an interviewee who has a difficult story to tell.

4. Audio DOES NOT JUDGE APPEARANCE: the fat, the thin, the old, the young, the beautiful, the ugly, people’s racial identifiers and disabilities, audio makes us more equal. This is hugely liberating for some interviewees, such as in the documentary about a young woman with anorexia, Will Kate Survive Kate?

5. Audio CREATES THE BEST PICTURES – sound is subjective, “a partnership between memory and imagination,” as UK broadcaster Seán Street puts it. An audio narrative invites each listener to co-create the story, rather than be the passive recipient of images on TV, or static words on paper or a screen.

6. WRITE FOR THE EAR: you’re telling stories and conducting interviews for the ear, not the eye. It’s a different approach. Tip: read your scripts and questions aloud as you write them.

Radio is arguably the original social media – being the most immediate and responsive of traditional mediums. Talk radio listeners have long been in the habit of “speaking back” to presenters, journalists and producers live to air, and contributing to the shaping of their stories as callers, along with correcting their errors.

For radio people, particularly those in community and public radio, engaging the audience and building communities of interest around content are standard modes that pre-date social media by decades.

So, ahead of starting your online radio show, or beginning a podcast series, you should think about borrowing audience engagement tips from radio-land (see adjacent guidelines).

NPR found that a good headline counts, as do “sounds that make you go WHOA!,” and adding an image to a social media post helps it to get shared. Other triggers are “storytellers” – the interviewees and reporters whose narratives make us want to pull over our cars in peak hour traffic to listen – and the long tradition of audio explainers.

The next Serial moment?

In addition to Serial, the past year has delivered us “Alex Blumberg’s addictive Startup podcast about starting a podcasting business. The Radiotopia launch and successful Kickstarter campaign. And at NPR, a new podcast called Invisibilia and an infinite-playing app called NPR One,” Senior Digital News Specialist Eric Athas at NPR Digital Services wrote at Nieman Lab. Check out these programs, podcasts and apps for inspiration, and also explore what other public broadcasters are doing – in particular, listen to the BBC and Australia’s ABC – and to acclaimed independent outlets such as Falling Tree Radio in the UK.

As for the next Serial moment: according to podcast consultant Todd Cochrane, it will be when Android supports a one-click app to play podcasts. Android devices and iPhones have roughly equal shares of the US market (47 percent), but Android dominates worldwide. Yet in the US podcast market, the recent New Media Exposition in Las Vegas heard that the figures are heavily skewed to Apple uptake: Android gets 11 percent; Windows 26 percent; iOS 50 percent.

So, before you put all your digital storytelling eggs in the video basket, consider the accessible but rich traditions of audio journalism and give listening a chance. Don’t wait until you have the perfect formula: Helen Zaltzman, creator of the popular The Allusionist podcast now on Radiotopia, advises learning by doing.

This case study appears in the World Editors Forum’s Trends in Newsrooms 2015, which is free for members to download. Read our previous #TrendsinNewsrooms 2015 blog series: