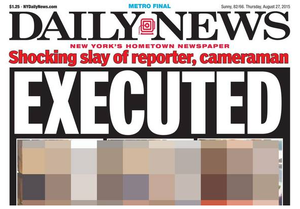 In the aftermath of yesterday’s on-air murder of reporter Alison Parker and cameraman Adam Ward in Roanoke, Virginia, media commentators have tried to unpack the consequences for journalism and publishing.

The debate is split between what news organisations chose to publish and that the gunman’s footage that was shared “seamlessly” to unsuspecting Facebook and Twitter users because of the autoplay function.

CNN took huge flack for carrying the network’s footage of the shooting throughout the day. But it was by no means alone in choosing to screen it. News organisations around the world linked to or embedded it on their own sites. The New York Daily News showed three frames from the gunman’s video in its print edition, in the UK, The Sun showed the video and stills from the camera, as did The Times and the Daily Telegraph.

Dave Callaway, Editor-in-Chief of USA Today, which has its headquarters in Virginia, said: “We chose not to show the killer’s video because of its graphic nature and, frankly, that’s what he wanted. We did show the TV station’s live capture of it because it demonstrated the surprise and horror of the crime while not specifically showing the victims’ deaths.”

Javier Garza, the World Editors Forum’s special advisor on journalist safety, agrees: “The network’s live video is newsworthy because it’s a very rare case of a homicide being committed this way. It’s also the first time we see a journalist being attacked on the job in real time. In an era when immediacy in social media has become a norm, this is an important, if painful, document.”

Garza says the murder underscores the danger for journalists doing their job. “There is no way to be really completely safe. Whether the victims were the random targets of a disgruntled former colleague or were specifically targeted, there is no complete protection from a madman. And this can happen everywhere. We hear about murder of journalists in the Middle East, Latin America, Russia or Central Asia. But just as we where shocked with the shootings at Charlie Hebdo in Paris, a place where we thought this didn’t happen, we are shocked again with the news in Virginia.”

Whether an ISIS beheading, Ashely Madison’s lists or Roanoke’s tragedy, the debates of what traumatic content to publish are no longer limited to newsrooms. Mathew Ingram, writing for Fortune.com, said decisions were “ having to be made not just by media outlets, or by Facebook and Twitter, but by all of us. Every user of social media is a publisher and a distributor of news. In the end, we all decide what standards of conduct or morality we are going to uphold, and it’s not getting any easier.”

Indeed not. Yesterday society took a major step to “total media immersion” said David Zurawik, writing in the Baltimore Sun. “Our lives – and deaths – played out on screens within screens with few if any filters. Let’s be honest, that is what many of us watched today: murder on videotape. Once upon a time, it would have been shocking to say that.

“But don’t blame CNN or any other cable channel for showing it. The images are everywhere – so everywhere, I would argue it is impossible for them not to permeate your consciousness in some way even if you decide not to watch them.

“This is what  happens when technology outraces analysis – and it takes over the culture before we have decided if and how we want it used,” said Zurawik.

The guilty bit of the technology is the “seamless” autoplay feature that allows instant viewing of videos on Facebook and Twitter.

“On Wednesday, the video that was auto-playing in everyone’s feed showed the murder of two people,” wrote Robinson Meyer in The Atlantic. It’s impossible to tell how many people saw the video (though Facebook’s version of the video was shared 500 times before it was taken down), but user reports suggest that thousands and thousands of people witnessed—without being warned ahead of time or knowing what they were getting themselves into—a brief, vivid, and unmistakable snuff film.”

“Forcing thousands of people to view two deaths without warning or preparation causes real harm. For almost all viewers, of course, watching the video does not approach the anguish felt by the victims’ friends, families, or coworkers. But that the auto-playing incident was not the worst horror in a morning full of them doesn’t lessen the need to talk about it, to figure out what happened, and to prevent it from happening again.”