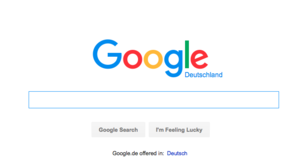 In April 2014 Mathias Döpfner, CEO of Axel Springer, famously took a personal stand explaining “Why we fear Google”. He did so in an open letter addressed to Google’s Executive Chairman Eric Schmidt, and published in the newspaper Frankfurter Allgemeine.

In that letter, Döpfner voiced his anxiety over the increasing “dependence on Google” that European newspapers are developing. One month later, Italian newspaper tycoon Carlo de Benedetti expressed his strong support for Döpfner’s position in a piece published in Italian and English, in La Repubblica and the Huffington Post.

More than a year later, the concerns of a large portion of the European newspaper industry are very much the same. They will be addressed in the next few months by the European courts and regulatory institutions. In anticipation of these developments, La Stampa interviewed Keese who summarized the views of the publishing house on the most burning of the upcoming issues.

In the summer of 2014 Axel Springer, together with other major German publishers, sued Google for unlicensed use of newspaper content. As a reaction, the links to the objecting newspapers were removed from Google News, which resulted in significant loss of revenues. German newspapers subsequently granted Google a free, temporary license, but they expect to obtain the right to demand payment for their content once the court case draws to a conclusion. The decision is expected by the end of September. It is important to specify that the German law requiring payment for content from search engines applies to all of the engine’s products: in the case of Google, not only Google News will be impacted by the Tribunal decision, but also general search results, including videos and images.

Google has reportedly claimed in the past that the results of a Web search were to be considered editorial content, and thus under the protection provided to freedom of expression by the First Amendment of the American Constitution. According to Keese, Google quickly abandoned this vision when the company realised that it could potentially imply an untenable level of responsibility on all content of a Web search. In the interview, Keese stressed once again that Axel Springer, like La Stampa, produces editorial content and that all a search engine does is aggregate that content: they should be required to pay for using it.

On a regulated Internet

A range of voices say that Europe has taken a protectionist “posture against US-based Internet giants (which) features all the ingredients of an entrenched ideology“.

Keese disagreed and said that the recent European initiatives in the field of antitrust, and the Internet in general, simply aim to build a legal framework for the Internet, the absence of which today puts the market at risk of the development of monopolies.

With EU Commission President Jean-Claude Juncker’s Digital Single Market strategy underway, the European Commission investigation on Google fast forwarding after the decision to issue a Statement of Objections in April 2015, and the modifications to both copyright and privacy rules expected in the next six months, the fall of 2015 is shaping up to be a momentous season for both the European newspaper industry and the internet giants.