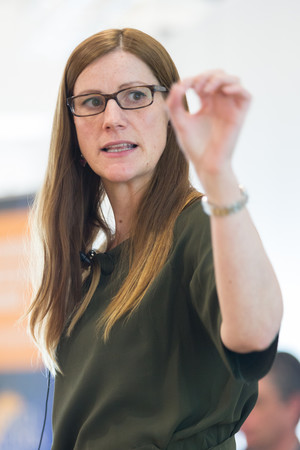 As Editor, Digital Innovation at Trinity Mirror Regionals in the UK, Alison Gow (main photo) is aware they cannot focus on every social channel. So long as Facebook drives 85% of traffic, there is simply no time for other channels, or as Gow puts it “there are other fish to fry”.

While they have made a few small experiments with Whatsapp and Snapchat, they are actually proving more useful for the newsroom itself. For example, Whatsapp is a great channel for coordinating multiple reporters on a big breaking story.

“We’re not the New York Times. If they have 400 developers, I probably have 4”

Meanwhile on Facebook, everything has to be an entry point for other content on the site.  Trinity Mirror titles have a publishing schedule and stick to it, and every post links people back to the original articles. Often it is not clear what the post is about until the user clicks back.

What Facebook does is allow them to reach out to certain specific audiences – for example with content for parents with young kids who are awake at 2am. And for brand engagement, for example around a recent campaign linked to the rugby world cup, it can also be highly effective.

Gow is aware your audience you cannot “stay in a silo”, locked into your own CMS. It is imperative to engage with Facebook, but in the right way. And if you encounter any rooadblocks or challenges, try just contacting Facebook direct and ask them how you can do it better!

Panel: Working with Social MediaAnders Refnov (second from left), Digital Chief Editor at Ekstra Bladet in Denmark has a proud statistic: only 13.7% traffic to ekstrabladet.dk comes from Facebook – making this the lowest percentage compared to any of their rivals – who are all at 20% or more.

They have one editor, two reporters and strong analytics support all focused on Facebook stories. But as the largest online news presence in Denmark with 905,000 unique daily visitors out of a country of 4.5m, when a big story breaks, the people come to them directly. Indeed, traffic on the 70% Facebook driven Metroxpress drops off a cliff.

As Refnov puts it, “We want real traffic that becomes loyal to Ekstrabladet.”

That means they do not want to “make stories about cats and dogs” – but they do see a market for it – hence setting up the heavily Buzzfeed influenced Digout.

While Digout “is a business” as Refnov points out, the long term goal is clear, “as they get older, hopefully they want some good journalism.”

This piece has been updated to correct that in August Facebook accounted for 85% of the traffic in total and not the Manchester Evening News, as previously stated.