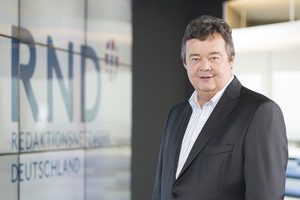 In this interview, Uwe Dulias, RND’s Managing Director, who will also be speaking at our Newsroom Summit conference on Monday in Hamburg, explains how the business operates and some of its plans for the future.

WAN-IFRA: How would you describe RND’s offering to a publisher who is not familiar with it?

From its central newsroom in Hannover, RND offers complete newspaper pages (politics, business & economy, sports, arts and culture, people and lifestyle) as well as individual news articles, interviews, editorials and features with national and international scope to MADSACK papers and others for print and online publishing.

In addition to our day-to-day business, RND offers supplements on travel, jobs, real estate and mobility on a weekly basis as well as a weekend special named “sonntag” [“Sunday”].

Furthermore, [for example, on 1 October] if you do a Google search for ‘RedaktionsNetzwerk Deutschland’ and the name ‘Schaeuble’ [German Finance Minister Wolfgang Schaeuble] you will see that newspapers all around the world published our interview – in Turkish, English, French, Italian, Spanish and so on. That means Mr. Schaeuble, through his interview with RND, reaches more than 100 million readers. This is the real attraction of RND: Politicians, stars, economists know that if they give us the story, they will reach millions of readers.

Was the external business aspect (creating content for sale to publishers outside your group) part of the concept of RND from the beginning?

MADSACK Media Group produces content for newspapers, Internet, radio and television. Nearly a thousand employees on our editorial staff are the guarantor for the highest journalistic claims.

For many decades, other publishers have been interested in our content. Already before we started RND, MADSACK Media Group produced content for external newspapers on a daily basis. Thus the external business aspect has tradition and we will develop it even further in the future. But already today the concept of networking through RND has helped a sizeable number of regional dailies to shift energy and manpower towards local topics.

RND offers three sizes of pre-packaged pages of content to other publishers. How complicated is this to produce?

Today my colleagues say: ‘Theoretically it looked very complex to produce not only one, but three different formats under time pressure every day. However, in practice it was quite easy.’ The trick is a ‘Y production.’ After planning the topics, we build the newspaper pages in the medium format first. Next, we produce the biggest format and finally the smallest.

What is the editorial staff size of RND – and what is the breakdown of roles: how many journalists / editing & production staff?

All in all we have 50 full-time employees on our editorial staff, plus Berlin and Washington offices as well as a network of correspondents around the globe. We have five desks in our newsroom:

Does RND have any plans to offer this content to other publishers as individual stories and images – as news agencies do?

Yes, we will. Some publishers ask for content this way. We will never be a news agency, but we want to offer special topics and service-related articles via an online solution. We plan to start this business next year.

Uwe Dulias will speak at WAN-IFRA’s International Newsroom Summit in Hamburg, Germany on 5 October. For programme details and to register, click here.