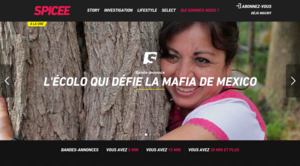 Spicee is a documentary website launched in June by two former senior French television executives – Jean-Bernard Schmidt, previously of M6 and Capital, and Antoine Robin, formerly with Havas Productions. Both were tired of the limitations of television and wanted “to do whatever we want.” With a seed investment of one million euro from their families and friends and nine months of preparations, a simple-designed but serious online documentary channel was born.

With the success of online video made by BuzzFeed and Vice, many media companies such as The New York Times and The Wall Street Journal have rushed to build their own video teams and online video repertoire.

The latest was CNN, which launched the Great Big Story last week, a video site filled with light hearted, sharable content targeting 25-35 year olds. Most of its videos are 2-3 minutes long and include topics such as the voice behind the Kool-Aid man, cosmic visions of astronauts and the story of the strongest man on earth. The online channel will also be producing native advertising.

Aiming to be “Vice but with virtue,” Spicee features almost exclusively international documentaries on difficult subjects that range from police brutality in the US to untold Australian immigrant torture to drug trafficking in the Middle East. It also has some lighter features on a dancer in Indonesia and fashion in Africa. The most popular video on its site so far is a 57-minute investigative documentary on the Jihadists in Syria.

With a strategic alliance with Babel Press agency, a global network of 45 freelance video journalists across three continent, and without the constraints of audience rating and limited air time, Schmidt has also been commissioning and getting pitches from all over the world.

In particular, it is a place for ideas that might otherwise have been deemed too risky by traditional television networks. As an example, they have just accepted a pitch by a 26-year old freelance journalist who will be completing a film on surviving descendants of the Rwandan genocide in a month’s time.

“It’s a very hard topic and she is very young, but we said ‘yes’ after five minutes,” said Schmidt. “We are doing some true great reporting and we are targeting an audience that is really hardcore.”

With two to three films launched each week, Spicee has accumulated more than 20 hours of programming, though Schmidt admits that his website now needs more films on lighter subjects. So far, Spicee has no advertising and Schmidt said there are no plans to acquire advertising so that they can remain “completely independent.” This puts pressure on acquiring enough subscribers to offset the cost.

In the four months since its launch, Spicee has attracted 4,000 people to its free email newsletter mailing list and 800 paying subscribers, who pays €2.50 for a film, €9.90 for a month or €96 for a year. A 50 percent discount is available for subscribers under the age of 25.

Of the subscribers, 35 percent are younger than 30 years old and about 20 percent are outside France. Originally expecting to attract an older audience of 30-to-50 year olds, Schmidt was pleasantly surprised. “It shows that we have the potential for young people who are interested in tough subjects.”

The Spicee team has expanded from six to 10 this year, consisting mostly of film editors, communication and web managers, technologists and developers. It does not have any dedicated marketing personnel, though it is looking to expand its social media presence, distribute its marketing postcards and receive greater media coverage.

This week, it has just landed a two-page coverage in the weekly French cultural magazine, Télérama, and more will be coming next week.

Most of its subscribers appear to come from word of mouth. Browsing through Spicee’s Facebook page, many of its 4,200 fans work in media-related industries. Roxanne Florin is a journalism graduate student at Science Po. She heard about Spicee through a friend who had worked in Babel Press. “They have original angles and their reporting is from all over the world, places where traditional media don’t go,” wrote Florin in a message response. She aspires to be documentary film maker and is a Spicee student subscriber. “I think it isn’t expensive for the high quality of the documentaries.”

The Spicee team is hoping to attract 3,000 subscribers by its first birthday and at least 20,000 by its three-year mark. It is also trying to sell the rights to its films abroad. Its film on police brutality in the US has already sold to Al Jazeera, as well as TV channels from the Netherlands and Canadan.

In order to achieve profitability, Schmidt said Spicee will need to expand globally and most likely attract new investment. An English version of the website and a drop-down subtitle selection tool is almost ready to launch as well.

Competition for audience is likely to be fierce. Having just won an Emmy Award and with a continuing contract with HBO, the aggressively expanding Vice has just announced that it is launching 12 TV channels across Europe in the next 12 to 18 months, with ongoing talks with Netflix, ITV, Sky and Discovery.

Besides working on its main documentary offering, the young Spicee is also preparing Spicee College, a special channel targeting 8-12 years olds. Having two daughters aged 8 and 12, Schmidt said he is impressed by what his daughters know from their mobile phones and computers, but he may not always have the answer when they ask questions on news events such as Charlie Hebdo attacks or events in Syria.

Given the lack of programming for children that explains the news, Spicee College aims to provide news products that parents can show to their kids. In November, Spicee College will be launching three films on English learning, day-to-day news for kids and how images can lie.