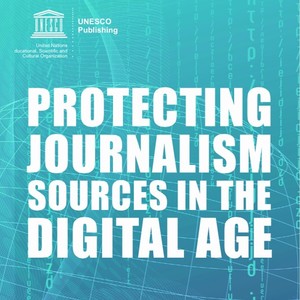 A major extract from the study features in UNESCO’s flagship publication World Trends in Freedom of Expression and Media Development being launched in Paris, London and New York today, as part of events marking the International Day to End Impunity For Crimes Against Journalists.

What follows is an edited extract of the chapter based on the study whcih is featured in the UNESCO World Trends report*.

1. 84 UNESCO Member States out of 121 studied (69 per cent) for this report demonstrated noteworthy developments, mainly with negative impact, concerning journalistic source protection between 2007 and mid-2015

2. The issue of source protection has come to intersect with the issues of mass surveillance, targeted surveillance, data retention, the spill-over effects of anti- terrorism/national security legislation, and the role of third party internet companies known as ‘intermediaries’

3. Legal and regulatory protections for journalists’ sources are increasingly at risk of erosion, restriction and compromise

4. Without substantial strengthening of legal protections and limitations on surveillance and data retention, investigative journalism that relies on confidential sources will be difficult to sustain in the digital era, and reporting in many other cases will encounter inhibitions on the part of potential sources

5. Transparency and accountability regarding both mass and targeted surveillance, and data retention, are critically important if confidential sources are to be able to continue to confidently make contact with journalists

7. It is recommended to define ‘acts of journalism’, as distinct from the role of ‘journalist’, in determining who can benefit from source protection laws

8. To optimise benefits, source protection laws should be strengthened in tandem with legal protections extended to whistle-blowers, who constitute a significant set of confidential journalistic sources

10. Journalists are increasingly adapting their practice in an effort to partially shield their sources from exposure, but threats to anonymity and encryption undermine these adaptations

11. The financial cost of the digital era source protection threat is very significant (in terms of digital security tools, training, and legal advice), as is its impact on the production and scope of investigative journalism based on confidential sources

12. There is a need to educate journalists and civil society actors in digital safety

13. Journalists, and others who rely on confidential sources to report in the public interest, may need to train their sources in secure methods of contact and information-sharing

The expansion of digital communications and monitoring has coincided with increased sensitivity to security issues in many countries in recent years, posing particular challenges to traditional legal protections for journalists’ sources. A reporter’s commitment to refuse attempts to compel them to identify their source/s in the analogue past may have provided significant protection for an anonymous source, but in the age of digital reporting, mass surveillance, mandatory data retention, and disclosure by third party intermediaries, this traditional shielding of identity can be penetrated.

The data assembled for this research confirmed the existence of four key overlapping and inter-related trends affecting the legal protection of journalists’ sources globally in the digital age. They are:

Aided by technological advancement, law enforcement and national security agencies have shifted practice from a process of detecting crimes already committed, to one of threat prevention. In the digital age, it is not the act of committing (or suspicion of committing) a crime that may lead to a journalist or a source being subject to surveillance, but the simple act of using mobile technology, email, social networks and the internet. As a result, journalistic communications are increasingly being caught up in the nets of law enforcement and national security agencies. Additionally, the communications of particular journalists and sources may be expressly selected for targeted surveillance.

Parallel to these developments, the past decade has increasingly seen restrictive anti-terrorism and national security legislation, potentially curtailing existing legal protections, including ‘shield laws’. These entail moves to broaden the scope of ‘classified’ information and reduce exceptions that would allow coverage in the public interest, and to criminalise any disclosure (in some cases, also including publication by journalists) of any information classified as State secrets, without there being provisions for public interest exceptions. These security trends, along with digital tracking, can impact on both journalists and their sources, and constrain, or ‘chill’, public interest journalism, especially investigative journalism that relies upon confidential sources.

Why is confidentiality still important?

Without an ability to rely on confidential sources, many acts of investigative story telling may never have surfaced. This is why there is a strong legal tradition of source protection globally, in recognition of the vital function that confidential sources play in facilitating ‘watchdog’ or ‘accountability’ journalism. It also explains why there is an internationally established ethical obligation upon journalists to avoid revealing the identity of their confidential sources. Maintaining confidentiality is a way to avoid jeopardising the flow of information that can make an important contribution to combatting corruption and human rights violations.

Accordingly, free expression standards internationally uphold the confidentiality principle. This principle shields the journalist directly by recognising their professional obligation not to disclose the identity of the source, and it shields the source indirectly through the journalist’s commitment. However, this principle works in practice only if the identity of the confidential source cannot be easily discovered by other means and where there are legal limits on the use of this information if anonymity is compromised.

Significant change occured in the realm of legal protections for journalists’ sources between 2007 and mid-2015. There has been been a partial trend towards preliminary recognition of challenges in terms of international actors, but there is less recognition of the issue at national/State level. The developments recorded in the past eight years are generally in directions that run counter to robust source protection in the digital era.

Furthermore, there is the question of entitlement to protection: in an era where citizens and other social communicators have the capacity to publish directly to their own audiences, and those sharing information in the public interest are recognised as legitimate journalistic actors by the United Nations, to whom should source protection laws apply? On the one hand, broadening the legal definition of ‘journalist’ to ensure adequate protection for citizen reporters (working on and off-line) is desirable, and case law is catching up gradually on this issue of redefinition. However, on the other hand, it opens up debates about licensing and registering those who do journalism and who wish to be recognised for protection of their sources. This is why the key tests in contemporary society for access to source protection laws are evolving towards the definition and identification of ‘acts of journalism’, rather than occupational or professional descriptors.

Journalists and news organisations are in the process of adapting their practices – strengthening digital security and reverting to pre-digital era methods of communication with confidential sources. But unless individual States and regional bodies revise and strengthen their legal source protection frameworks, journalists adapting reporting methods and reverting to analogue ‘basics’ will not be enough to preserve source protection in the digital age. In an era of technologically advanced spy-craft, it is also necessary for States to review surveillance practices and oversight in line with UN General Assembly resolutions on privacy.

In addition, States need to limit data retention and rendition laws, improve accountability and transparency measures (applied to both states and corporations in regard to journalistic data), and create exemptions for journalistic acts within over-riding national security legislation.

Note: Another major recommendation of Protecting Journalism Sources in the Digital Age is the implementation by States of an 11-point framework for assessing the strength of source protection laws internationally.

Disclaimer*: The ideasand opinions expressed in this publication are those of the authors; they are not necessarily those of UNESCO and do not commit the Organization

For many editors, the hybrid newsroom is here to stay

How are news organisations adjusting as pandemic restrictions ease?