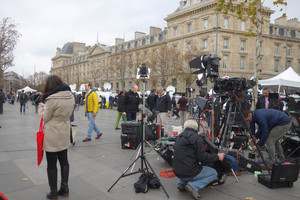 Several proposals to control the media had been suggested during the rapid examination process for the extension of the ‘State of Emergency’, declared on Saturday the 14th of November, the day after the Paris attacks.

The French newspaper Le Monde mentioned there were discussions of an amendment to enable the state to regulate the live reporting of police information.

A similar move is seen in Brussels, where police called for a social media blackout during the anti-terror operations this weekend, in order not to give away officers’ movements.

We expressly ask you not to diffuse any live pictures of the police operation in Molenbeek and this for tactical & safety reasons. Thanks!

303 people are talking about this

Reporters Without Borders said that in addition to imposing controls on media, “the law allowed the police to search the offices of journalists, judges and elected officials without having to request permission from a court.”

None of the proposed amendments were pushed through, for fear of constitutional censorship, but a control of the media was still permitted as per the legislation dating from 1955. Hence why an additional amendment was passed last Friday to “eliminate all media censorship.”

“Even if they were never applied, these provisions posed a threat to freedom of information in France and we welcome the government’s decision to eliminate them for good,” Reporters Without Borders Secretary-General Christophe Deloire said.