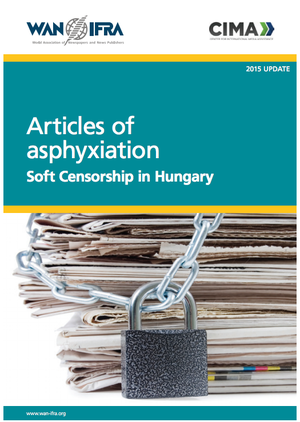 Updating WAN-IFRA’s 2013 findings, the report highlights the latest soft censorship concerns and their impact on the media landscape and press freedomin Hungary.

“Capturing Them Softly: Soft Censorship and State Capture In The Hungarian Media” (2013) concluded that state influence over Hungarian media accelerated sharply after the right-wing Fidesz Party took power in 2010. The 2015 updateshows that media market interventions expanded aggressively in 2014, after Fidesz retained its two-thirds parliamentary majority in the April election.

The introduction of an advertising tax in 2014 is one of these measures distorting the media market. It especially affects television, exerting disproportionate impact on one of the two leading national commercial broadcasters, market leader RTL Klub.

The Parliament also adopted a law barring RTL Klub, and the second national commercial television, TV2, from receiving program service fees from cable companies, which could significantly cut revenue for both television channels.

A transformation of the radio market has also taken place in recent years. After a national commercial radio went bankrupt in 2012, the National Media Council granted its licenses to public radio stations. At the same time, new players began gaining strength due to the media authority’s license tender practices. Favoured recipients were radios owned by right-wing media empires and radios withreligious content. Rather than having local media convey local content on local frequencies, the media authority has promoted centrally broadcast religious programming for wide dissemination. This major media policy interventioncannot be regarded as legitimate in the absence of public planning and debate, the report stresses.

At the same time, allocation of state advertising remains opaque and unfair, based on the political leanings of particular media outlets. According to the interviewees, segments of the market that are financially and politically independent, and strive to preserve their professional integrity, have lost ground. At the same time, the current ruling party is turning public service media into its mouthpiece.

The dismissal of the Editor-in-Chief of popular news portal Origo.hu, Gerg Sáling, in June 2014 is also seen as proof of increasing government pressure. His sacking was triggered by an Origo.hu investigative report that revealed strikingly high costs for an official international trip by a cabinet member. A mass resignation of editors and journalists from Origo.hu followed.

Other events, like the discussions after the purchase of TV2 by two of its executives, have evinced that transparency in media ownership is seen with disbelief in the country. Some articles claim that the government’s film commissioner, close to the prime minister, was involved, and is now said to have influence over the station.

The 2015 update shows that the current problems in Hungary go beyond the observations of the 2013 report, when the process was described as “creeping strangulation”. Today there is a sweeping offensive by a ruling party that is thoroughly intertwined with business interests at every level, seeking to stifle all independent journalism, including mainstream commercial media, non-profit media outlets, and online news sources, as well as opposition party-affiliated media.

These changes are limiting public debate and imperilling Hungary’s democracy.

Without intensified international pressure, “there appears little prospect that the current government will change course and adopt the recommendations needed to restore Hungary’s media to its proper role of promoter and defender of democratic processes,” the report concludes.

Learn more about Soft Censorship at www.softcensorship.org, download the free reports and help spread the word using the hashtag #softcensorship

Mertek Media Monitor, responsible for the research in Hungary, is a Budapest-based think tank and watchdog organisation founded in 2011. The team includes experts in sociology, journalism, economics, and law.

This article was written by Mariona Sanz Cortell