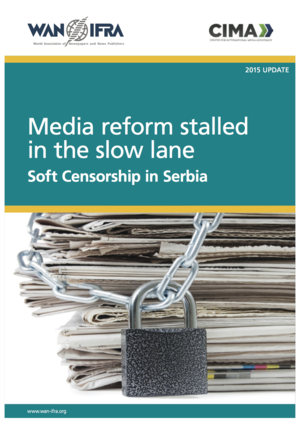 In what is only a partially privatized media market, most Serbian media is financially unsustainable and thus prone to political and economic pressures. These are some of the conclusions of “Media reform stalled in the slow lane: Soft Censorship in Serbia 2015 Update”, a new report by the World Association of Newspapers and News Publishers (WAN-IFRA), the Center for International Media Assistance (CIMA) and BIRN Serbia.

WAN-IFRA and CIMA define soft censorship as “the array of official actions to influence media output, short of legal or extra-legal bans, direct censorship of specific content, or physical attacks on media outlets  or media practitioners.”

“Soft Censorship: Strangling Serbia’s Media”, released in January 2014, described how Serbian officials were systematically obstructing urgently needed media sector reforms, especially regarding state funding of media outlets. Eighteen months later, these delays still persist, and undemocratic practices in the media sector continue unchecked. Small improvements to the legal framework are noted, but even these are not yet fully implemented. Privatization of state media assets has stalled.

The 2015 update shows that the Serbian government has taken several formal actions to begin implementation of the 2011 Media Strategy, and to improve the legal framework for the media sector.

The most significant change in the new Law on Public Information and Media regulates financial relations between state and media. Starting from 2015, authorities at all three levels of government—republic, provincial and local—are permitted to spend money aimed to support content production only through public competitions. While welcoming this step forward, the report emphasises that legislative efforts will not suffice if the government fails to fully respect these regulations.

State spending in Serbia’s media sector requires fundamental and urgent reform to ensure that taxpayers’ money is no longer used to impose soft censorship, and that instead public information is offered through free, independent and pluralistic media that facilitates informed democratic participation. Without this, “Serbian media faces further stagnation and decay, and Serbia’s democracy an uncertain future,” the report concludes.

The Balkan Investigative Reporting Network (BIRN), responsible for the research in Serbia, is a group of editors and trainers that enables journalists in the region to produce in-depth analytical and investigative journalism on complex political, economic and social themes. Operating in the field of media development and good governance, BIRN Serbia’s mission is to advance the country’s political, social and economic transition through the provision of objective and quality information, the training of journalists, and assistance to institutional reforms.