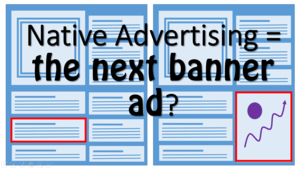 In general, brands approach advertising agencies to create content, which is then distributed through the media networks of thousands of publications via advertising space. As publishers begin creating customized native advertising for brands, the content created usually just stays within their own publications.

“It is always a challenge for any of these studios to get someone to come back and want to do it again, repeat advertising,” said Kaylee King-Balentine, head of The New York Times’ T Brand Studio in London. “We have to get it right the first time.”

While content is crucial, the questions of scale and impact also hugely influence whether brands will continue to invest in native advertising.

Scale is a challenge
“The problem brands have with premium publishers is that the scale is often not large enough for them to justify the investment,” said Seraj Bharwani of Visible Measures. “If you spend $1 million and the publishers provide 100,000 impressions, it’s not enough, they need greater scale.”

Many technology start-ups have jumped in to help. Created in 2007, Sharethrough is one of the earliest companies to create a platform solution for publishers to distribute their content. In fact, its founder Dan Greenberg has often been credited with coming up with and popularizing the term native advertising.

Compared with the top most read online publication MailOnline, which reached a 100.5 million visitors on all platforms according to comScore, Sharethrough has a database of more than 400 publishers with a combined reach of 270 million global uniques across over 3 billion monthly impressions. The company is targeting an annual revenue of $100 million this year.

In September this year, Sharethrough announced a deal with AppNexus, one of the biggest technology companies providing online ad selling which handled $2 billion in ad spending last year. The partnership will allow real-time bidding and programmatic selling of native advertising.

This means that content created by a publisher for a brand can instantly be distributed across the web. It also means smaller publications that do not have the content creation capability can sell native advertising space and fill it with branded content created by other publishers or brands themselves.

“The same technology that powers banner ads, the targeting technology, it is shifting to native advertising,” said Tom Channick, former Head of Communications at Sharethrough, who recently moved to his new role as Corporate Communication Manager at Facebook.

To ensure that only the best content is distributed, Sharethrough only works with premium brands and has a content score built into its system that takes into account different levels of engagement.

Most of the native advertising distribution platforms also pay particular attention to user experience and special care is taken to ensure that native advertising would appear in matching format on different publication websites.

Another startup with 400 publishers on its client list and $20 million in new funding is Nativo. It has a contextual matching tool which matches native advertising to the particular site and section. It also provides review mechanisms for publishers and automatically removes a piece of native advertising if no engagement is detected.

Recognizing the need for scale, The Guardian recently announced an advertising programmatic alliance called Pangaea with four other publishers: CNN, The Economist, Financial Times and Reuters. By combining their readership reach and providing access to advertising inventory, they will collectively be able to charge a higher price for their advertising offering. The Guardian is also looking for further partnerships.

It has just hired David Gehring, a former Google executive, as its vice president of partnership based in San Francisco whose responsibility is to build and deepen relationship with leading edge technology companies based in Silicon Valley and beyond.

Given the concern, some digital native publishers who depend almost exclusively on native advertising as a source of income such as Refinery29, Vice, Vox, BuzzFeed and Mic are saying no to engaging programmatic native advertising, fearing that it will disrupt user experience and overrun their sites with tracking mechanism as in the case in banner advertising.

“What’s happening is that anyone that used to do banners will try to go native,” said Justin Choi, founder of Nativo. “Publishers have to be careful in choosing what they put on their site, in order to survive long term, they have to provide a good user experience.”

Contently, a content marketing company, echoed the same worry. “If we do native wrong, if it ends up programmatic, we will have native ad blocking very soon,” said Sam Slaughter, Vice President of Contently.

In fact, some native advertising headlines and texts have already been blocked though no publication has reported visible impact.

Looking to the future
As traditional print revenue continues to fall and digital display ads are blocked, the trend of publishers offering native advertising will continue, whether it is adopting a Forbes model of renting out space or offering a range of content creation services like The New York Times or going the full length of creating a full service marketing agency like The Guardian.

With increasing demands from marketers and brands, we might be seeing more publishers opening up their editorial space to native content as in the case of Forbes, trying their hands at content creation like The New York Times and bigger publications moving towards The Guardian model.

The New York Times has recently announced a new role for its deputy editorial editor, Trish Hall, who will “analyse articles and projects that are in the works and might lend themselves to sponsorship,” and its new strategy clearly states that it will be “expanding T Brand Studio into an agency in its own right, providing a broader array of marketer products and services around content ideation, creation and distribution.”

With pressure from publishers and advertisers, Ad Block Plus, one of the largest ad blocking companies, has recently announced that it is forming an independent board to determine if ads qualify as “acceptable” and allowed through its filter. However, this will most likely not solve the issue if publishers continue to pack their sites with advertising and trackers, of which researchers say publications websites have more than twice the number of trackers than on average websites, that prolong loading time or dampen user experience by interruptive advertising.

In this graph below, you can see how advertising slows down mobile websites for major publishers.

Graphic by The New York Times

The organization is launching a new standard of LEAN, which stands for “light, encrypted, ad-choice supported, non-invasive ad,” that aims to put “user experience” at its centre. Some media companies have already started their own initiatives: Slate has embarked on working to reduce its webpage loading time by 75 percent.

“Ad blocking is the best thing that could happen to advertisers and publishers,” said Joe McCambley, founder of marketing consultancy Wonderfactory and one of the earliest designer of banner ads. “It forces us to make better ads and create better content, I would call it an age of renaissance for advertising.”

The surge in ad blocking is a reminder to publishers that its past success is built on audience engagement and trust.

“Publishers need to be very mindful what runs on their feed, if they deliver bad experience to user, they are trading engagement for revenue, which means they will lose the users in the end.” – Nativo’s Justin Choi