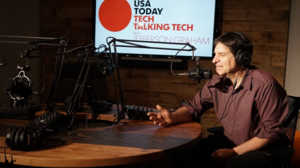 The technology Callaway and his publishers were talking about is the connected, driverless cars. Not only are more cars connecting to the Internet with a voice recognition command system, and integrating seamlessly with smartphones, many are now capable of navigating roads and sensing the environment without human input.

Such development is prompting more content production as driver attention is freed up to enjoy entertainment in the car, such as podcasts. Cars are often perceived as the last opportunity for brands to connect with consumers before they drive somewhere to make a purchase.

Fasten your seatbelts
“It’s all about advertising and a captive audience,” said Roger Lanctot, Associate Director in global automotive practice at Strategy Analytic, a consulting firm. “People are seat-belted in, they have to listen. The only way a person in a car can fight back is to pick and choose what has superior quality and user experience.”

Competition for attention has led to an increase in podcast production. “We are seeing an explosion [in podcasting], it seems that everyone wants to get into podcasting now, even my dentist asked me about it the other day,” said Kerry Donahue, director of the radio program at the Columbia Journalism School and an independent producer.

One of the reasons for the popularity of podcasts is because it is technically easy to produce and it is relatively easy to monetize. “The ads work. Large and small advertisers report a significant upside to the campaigns they run on podcasts and ad rates on top-tier podcasts approach $100 per thousand listeners, which is many times what it costs advertisers to reach audiences in most other digital formats,” wrote Farhad Manjoo, a technology reporter, in the New York Times.

In fact, as mobiles phones become more prevalent and streaming becomes easier, podcast listening has already been on a steady rise. According to Pew Research, awareness of podcasts in the US has more than doubled since 2006 to 49 percent in 2015 and the percentage of Americans who have listened to podcasts tripled to 33 percent in the same period.

Last year, podcast was further revived with the stunning success of Peabody Award winning Serial, a spinoff long form podcast program from American National Public Radio. Not only are traditional radio programs producing podcasts, new podcasting companies such as Radiotopia and Gimlet are popping up, new digital natives such as Quartz and Buzzfeed are launching their own pod-programs and so are traditional print publications such as New Yorker and USA Today.

USA Today is building its audience
A year after that conversation with his publisher, Callaway told us that USA Today now has 18 podcast channels and is continuing to open new programs. As the top circulating paper in the US with more than four million in weekly circulation, USA Today is well positioned to transfer its reporting into short snack-bite podcasts with simple training and recording tools.

“If you have someone who is willing to be a host, it is pretty easy to have a podcast,” said Donahue. “Podcasts is all about content, you may lose people if you have bad audio but you will get people at least in the door if you have excellent guests.”

Focusing on USA Today’s strengths, which are columns and personalities according to Callaway, the podcasts from USA Today are niche-focused and emphasize on access to interesting figures such as athletes and political figures. Many of the podcasts are built on pre-existing columns in the paper such as “Talking Tech” on new technology, “Capital Download” on politics and “Mothership” on entertainment.

With podcasts, reporters are able to inject emotion and tell the story in a narrative arc that is more casual and conversational. At USA Today, podcasts are attracting a new audience – more affluent, more educated and younger, where more than half is millennial – and having a high level of engagement.

“Podcast is a very intimate medium, which is different from videos that are usually made for broadcast,” said Donahue. “It’s like a phone-call from a friend.”

Getting ready to monetize on podcast
While USA Today did not disclose exact figures, Callaway said the newspaper’s top podcast programs, such as Talking Tech and Mothership, have been attracting millions of users and the downloads have seen 200 percent in recent months. Callaway said the current focus is to keep growing the audience to a point where they can begin to monetize on the podcasts, most likely in the form of sponsorship or distribution agreement, possibly in 2016.

As USA Today sets about this task, Serial has already signed a distribution contract for the release of its highly anticipated second season with Pandora, a music and podcast streaming service with more than 78 million regular listeners. Not only is Serial expected to gain greater reach than its forty million downloads for the first season, the revenue sharing model with Pandora is also expected to increase its revenue income.

Still, the evolution of the connected car is slow as cars have a long life cycle. Manufacturers need time to incorporate the technology, not to mention the legal hurdles as it relates to road safety. Dealers also need time to learn and explain the various new technological features to the consumers. Lanctot estimated that currently only 20 percent of the cars in the US are connected cars and each year new cars only represent five percent of all cars on the road in the US.

All this to say that the potential is out there, but change is not overnight. While awaiting the car industry to evolve, podcast producers are preparing by honing their capability, building their audience and expanding their reach.