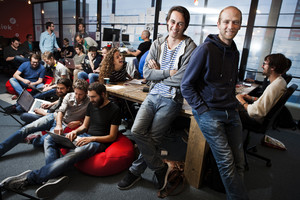 “In The Netherlands and Germany we’ve proven that we can get young people to pay for high-quality journalism — as long as they don’t bump into paywalls or ads all the time, don’t have to register for every website, only have to pay for the articles they actually read and can get their money back if they don’t like a story,” says Blendle co-founder Alexander Klöpping in a press release.

The Dutch startup knew early on it had to go international to sell enough articles to become sustainable. Going to the US was a logical next step as it won investment from The New York Times and German publisher Axel Springer shortly after its launch in the Netherlands last year. The young company is growing at an average rate of 10 percent per month and its team has doubled to 70 members since May. Yet, it is still in the red and profits aren’t expected until 2017.

It already has more than 500,000 users in the existing Dutch and German markets and the “Spotify-for-newspapers” has recruited nearly 200 publications onto its system. Blendle is withholding the names of its US launching publishers, but so far big names such as The New York Times, The Wall Street Journal, The Washington Post and The Economist are already onboard. Whether or not it will be able to pick up speed in the English-language market is to be seen, especially given the difference in reader behaviour and the varying availability of free journalism says Valerie Arnould from WAN-IFRA’s Global Advisory team.

What’s all the fuss about?
The success of Blendle lies in its convenience: a simple sign-up process and easy access to a wide range of articles that would normally be behind separate paywalls. Most-read articles are background stories, big interviews, reconstructions and columns rather than hard news.

To engage its readers, Blendle writes a daily newsletter of staff-picked articles. This is one of its most important sources of income. The company doesn’t disclose its exact revenue, but they said that 40% of the current number of 200,000 receivers opens it. The number of “clicks per unique opens”, which is when a reader automatically buys an article by clicking on a newsletter story, is usually around 15%, with a record number of 25%.

It’s not a matter of click-bait though. Misleading a reader into buying an article is pointless because of the ‘money-back’ button that allows readers to request a refund if they don’t like a story. About 10% of all articles are refunded, and an abuse policy is in place to ban ‘serial’ refunders. These policies are all in line with Blendle‘s motto to be “supersympathiek”, which translates to super-nice in English.

What’s in it for publishers?
Getting publishers on board is challenging because many are reluctant to hand over control of their content, or afraid to lose readership. Its first launch in home country the Netherlands took a long process of negotiations, but with the help of well-known Dutch journalist Klöpping, Blendle managed to convince the majority of Dutch publishers to get on board.

Publishers do not have to pay to place their articles in Blendle and they can set their own article price up to €0.99 ($1.10). Blendle is capping its price tag “to avoid becoming an expensive newspaper platform,” Marten Blankesteijn, who founded the company, told the World Editors Forum in an interview. For every article sale, the publishers keep 70 percent of the revenue and Blendle takes 30 percent, a structure similar to the Apple store.

More than half of Blendle’s users are under the age of 35; a group that wasn’t used to paying for news before. For some publishers it’s become a marketing tool to reach the much-desired millennial audience. Dutch publisher De Persgroep initially refused to join, but after signing up, their newspaper ‘De Volkskrant’ became the most popular publication on the platform. “We’re gaining a new audience,“ says Laurens Verhagen, Digital Chief of De Volkskrant, in a phone interview.

Others see Blendle as an additional source of income. Van Lanschot tells us that revenue generated from the platform is now becoming a separate line on many publishers’ financial sheets. But some aren’t overwhelmed by the sales figures. “I calculated that we earn €50,000 per year with Blendle. I couldn’t even pay one journalist for that amount,” said Peter Vandermeersch, Editor in Chief of NRC Handelsblad, in a Dutch TV program six months after joining.

So far, not one publisher has pulled the plug, but that doesn’t mean persuading new publishers to sign on has gotten any easier. Louis Dreyfus, CEO of the French newspaper Le Monde tweeted recently that he would not join Blendle, potentially causing a setback to Blendle’s plan to expand in France, since the startup doesn’t launch until a majority of publishers are on board. Still, Van Lanschot is optimistic about entering the French market: “Spotify is also good without Taylor Swift.”

Tweet translation: “We will not be on it. Have a nice day.”