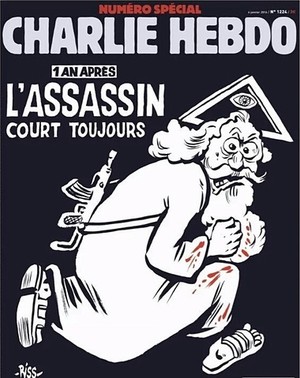 The cover of the commemorative magazines released on Wednesday suggests not much has changed: Charlie Hebdo is still alive, still producing provocative editions.

Managing Editor Gerard Biard told the BBC that the spirit was the same – the only difference was the emptiness the staff was suffering.

But in the French media Charlie has become ‘a symbol, a monster, a meaningless sign’, writes Guillaume Erner, presenter of the French public radio show ‘Les Matins’, in the special edition.

Erner says the satirical magazine has been held responsible for the evil things that happened, because “after all, it’s the cartoonists who started it, if they would have just been a bit more careful with their pens…”.

It seems a lot has changed in the way French media deal with terrorism and in the way they cover religion.

Caution or self-censorship?
“Many Anglo-Saxon media refused to publish the drawings because they thought it could hurt Muslims that live in their countries,” says Patrick Eveno, Professor at the French University La Sorbonne, and President of the Observatory of the Deontology of Information (ODI). “Now, in France as well, people are asking themselves if Charlie doesn’t go too far.”

“The current problem among journalists [in France], is that they are somewhat reserved,” Eveno told us. “There is a sense of thought and action that wants journalists to be more careful about what they write, what they say and what they draw.”

But this extra caution has also improved the way the media treats Islam believes Jean-Marie Charon, a French sociologist and researcher in media, information and journalism. “It has driven journalists to refine their words, to introduce nuances when they talk about the ways in which religion is practised.”

“The progress is due to an improvement of the skills of journalists,” Charon says, “and an upgrade of their address book which now includes more diverse profiles and different thoughts.”

And these improvements are much needed with the rise of hate-speech due to terrorism and migration.

Hate-speech on the rise
“With every terrorist attack from ISIS, hate-speech within society is getting bigger,” said Charon.

It is an incredibly dangerous and growing problem, whether by politicians, religious groups, on social media or elsewhere, according to Aidan White, Director of the Ethical Journalism Network.

The glaring example is the attitude of American Presidential candidate Donald Trump towards migrants and Muslims: “From that hate-speech, there springs a possibility of inciting others to intense hatred and to take violent action,” White told the World Editors Forum.

The challenge for journalists is to identify hate-speech, decide how to report on it and put it into context. “Living in an age of hate-speech, journalism is needed more than ever to counteract the drift towards intolerance and extremist violence,” says White, whose organisation put combatting hate-speech high on their agenda for 2016.

More careful live coverage
“Back then [during the Charlie Hebdo attacks] some media weren’t very careful and gave the hostages’ location away. You can’t do that,” said Aurore Cloe Dupuis, a journalist at France24 in an interview with the World Editors Forum.

The mistakes that French media made in the live coverage of the events led to official censure, and one of the hostages, Lilian Lepère, who had to hide under a sink for eight hours in the attacked print shop, sued the French media for ‘putting his life in danger’.

Journalists we spoke to two days after the November Paris attacks said their newsrooms were extra cautious compared to how they dealt with the Charlie Hebdo coverage. An AFP-journalist relayed advice from senior staff: ‘this is not a race, we are aiming for accuracy, we’re not trying to be faster than Twitter’.