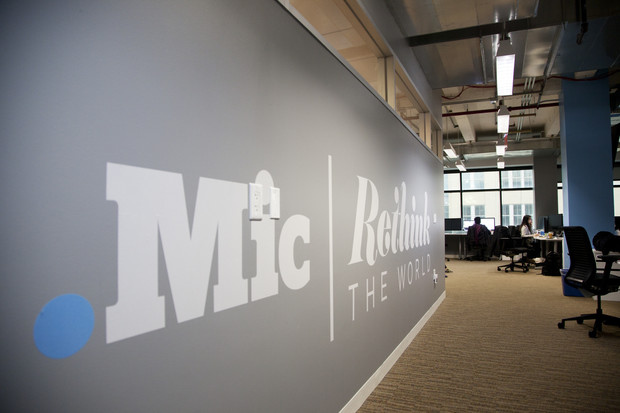 photos of Chris Altchek and the Mic.com offices for The Atlantic

“2016 will be a big growth year for Mic,” said Mic co-Founder Jake Horowitz, who talked to us in a wide-ranging interview. He will expand on that during a session at Digital Media Europe 2016 on 20 April in Vienna. “…We’ll continue to grow our team and also look to expand internationally. We’ll double-down on a few core events for the Mic audience that will push our audience to rethink the world.”

So how does a small startup site, essentially a side project run by two millennials with (very different) day jobs and who share disparate views on a number of issues, grow to a full-fledged digital media company that gets a sit-down video interview with the president of the United States – in just four years?

And in a relatively short span, capture an audience of 30 million visitors per month and attract the following demographic (and the attention of some big brands)?

The abbreviated version is that Mic did it by using a good mix of business, tech and social savvy while, crucially, sticking with its original vision: to provide Gen Ys like themselves with serious, meaningful news in the way they want to consume it. Mic gives them their dose of listicles and covers what some (read non-millennials) would consider off-the-wall issues but strikes a chord with this generation. But they also give them their hard news. All in the hope that, yes, it would empower GenY to “Rethink the World.”

And that vision is a good place to start with Mic’s journey (before delving into its next chapter).

Jake HorowitzIn the fall of 2010, “old” New York prep school buds Horowitz and Chris Altchek seemed worlds apart in their careers: Horowitz, a Stanford grad, working as a journalist for Change.org and Altchek, a Harvard grad, as an investment banker at Goldman Sachs in Manhattan. But they had stayed in touch and been discussing for some time the idea of creating a platform where healthy debate on serious and common issues could take place – much like they engaged in as friends – and in the language they spoke and understood.

In fact, Horowitz and Altchek were already testing the waters of such a site, called PolicyMic. But the side project became a full-time gig practically overnight in January (2011) when a contributor from Tunisia sent a series of reports on the uprising unfolding there, spiking traffic on the site.

It was just the jolt the two young entrepreneurs needed to scale up the site, seek funding and truly launch PolicyMic, the predecessor to Mic, which it rebranded in 2014.

“We realised the brand PolicyMic was going to limit what audiences thought we would cover, and the brand Mic actually has a lot of potential to become something big if we do it right and become a real household name,” Altchek told Observer.com in 2014.

On a new playing field

Today, Mic is indeed focused on more than just “policy” and managing a community of commentators from its origin, reporting on news, world, tech, science, arts, music, style and building discussions around verticals like “identities” and “connections.”

It also has grown to 106 full-time employees, 121 including freelancers and part-timers (as of 22 December 2015). This past summer, Mic dipped into the traditional news org pool when it hired non-millennial, Madhulika Sikka, from her executive editor position at NPR into the same role at Mic. And again most recently when it hired non-millennial Cory Haik, former executive director of emerging news products at The Washington Post, as Mic’s chief strategy officer.

Business Insider reported in late August of last year that Mic had raised US$ 32 million – its investors include Lightspeed Venture Partners, the Knight Foundation, Axel Springer, Bertelsmann Digital Media Investments, Advancit Capital – and was valued at US$ 100 million. That’s not nearly in the ballpark of the likes of Vox or BuzzFeed, but also not peanuts. With a growing sales team firmly in place – according to that BI report, the company generated no revenue in 2014 – and recently adding such well-known brands as Tag Heuer, FedEx, Dell, HP, Intel and Lenovo as ad clients, it appears Mic is bracing for another breakout year.

Editorially, Horowitz said Mic will focus on “growing both our editorial and video teams by deepening our focus on original reporting and launching new series. Given that it is an election year, covering the presidential campaign and going deeper with our policy coverage will certainly be a focus. We’ll also continue to deliver thought-provoking, forward-thinking news in categories Mic is known for such as technology, science and identities. You’ll see Mic content show up on different platforms in innovative ways.”

New card-based design for the home page.Just late last week, Mic rolled out a completely redesigned home page, featuring card-based design, integrating all of its channels (verticals, video, social, etc.) and doing away with its infinite scrolling page (that is still feature on all articles). Mic says it built a custom content management system for the home page and its editors.

Video, already a strategic backbone of Mic, will play a major role in the company’s growth strategy, both editorially and in (native) advertising, said Horowitz. “We have prioritised creating video with a strong news metabolism, that closely aligns with our newsroom culture of helping our generation understand the world in real-time,” he said. “That means leveraging all of the expertise we’ve developed in written editorial and building a video operation that is part of our news operation at its core.”

In contrast to that serious segment, MicCheck Daily features short videos (about 2 minutes) typically told by a Mic editor on such topics as “What’s the big deal with breastfeeding in public?” in an edgy, light-hearted fashion.

Mic launched into video in March 2015 with the debut of the web series, Flip the Script, hosted by Liz Plank, a senior correspondent and expert on millennial feminism. The eight-episode season confronted social issues and garnered more than 43 million views across its site, YouTube and Facebook, said Horowitz. Mic also produces “Future Present,” 6-7-minute videos that highlight cool technology.

Of course one of Mic’s crowning achievements so far was Horowitz landing the interview with President Barack Obama about the Iran nuclear deal, just the third video interview he had ever conducted.

“Of course there is a certain set of nerves when you’re sitting down one-on-one with the President of the United States of America, but they were all coming from a place of excitement and focus,” he said. “We were very prepared coming into the interview, and I couldn’t be prouder with the result.”

It’s not your typical one-to-one video Q&A with the most powerful man in the world. Many of the questions were crowdsourced and read from Horowitz, and the video features interstitched graphics, animations and images that obviously struck a chord with Mic’s audience, generating more than 11 million impressions.

To add to its political creed, Mic was the exclusive online partner with CBS News to co-produce and live stream the second Democratic debate in November. It has also been included as one of the digital content providers (Vice, BuzzFeed, GoPro, Mashable, The Onion, Red Bull, among others) for Comcast Watchable, the new free (ad-supported), on-demand beta video platform in the U.S., now available on iOS, the web, and Comcast’s X1 set-top box.

Secrets of social, shareability and distribution

With a newsroom full of digital and social media natives (journalists, developers, and data scientists), it’s no surprise that Mic thrives on creating content and conversations on social platforms.

Altchek told Re/code in a podcast interview that he credits Horowitz for much of Mic’s inherent “shareability” success, saying he “intuitively understands why some stories resonate that you might send to your friends and why some stories don’t… For whatever reason, some people get it more intuitively like Jake than others, and we built our analytics team to test what he thought was right and what he got wrong, and then turned that into a big ‘machine’ that turns that into a lot of good content editorially.”

Horowitz said: “On our growth team, we have dedicated team members focused on platforms like Facebook, tumblr, Twitter, Snapchat, Instagram, Vine, Periscope, Medium and beyond. Our growth and editorial teams work symbiotically to craft and share content that is tailored to each platform’s audience, and we pay close attention to signals from our audience by measuring the engagement and reach of every post.”

Horowitz did say that distributed platforms such as Instant Articles, Apple News, etc., have been a high priority for Mic since before they launched, “and they’re handled in the same way: with dedicated staffers designing our approach on a case-by-case basis.”

“The landscape of distribution changes so quickly, at least every three months. Whatever worked three months ago doesn’t work today.”

Of course, today, with this distributed content shifting constantly, it’s not easy, even for millennial journalists, to predict what may emerge around the corner. “The landscape of distribution changes so quickly, at least every three months,” Altchek told Re/code. “Whatever worked three months ago doesn’t work today. … Our referral traffic is still growing, although it is growing differently than it was a year ago.” The key, he said, is being present on all the different platforms and that a “plus or minus change of 50% in one platform doesn’t destroy you. I think that is how you build one of these businesses today, and you should expect meaningful changes in distribution for the next few years because none of these platforms are settled.”

Mic’s ramped up video efforts not only coincide with GenY’s insatiable appetite for video, but also with that of advertisers who are now shifting much of their traditional TV ad spend to digital properties.

“On the advertising front, we’ll expand our offering of products to brand partners to include new native opportunities across our video and editorial products,” Horowitz said. He said he could not disclose revenue figures on how much of the company’s ad revenue comes from video (nor specific overall figures), but he did say that it is a growing part of the revenue mix, and that its most recent “video partners” include those aforementioned brands: Tag Heuer, FedEx, Dell, HP, Intel and Lenovo. Those join such brands as Microsoft, Cole Haan, Cadillac and GE, which have partnered with Mic on branded content campaigns.

With Mic targeting an audience that carries much of the wealth of a generation, it feels it has a relatively simple sales pitch to big brands: “We understand this demographic better than anybody else, and we have a simple and clean way for you to work with us.”

For Mic, that means branded content, which forms the backbone of its advertising offer and relationships. It also makes sense since its target audience is allergic to display/banner ads and native helps to get around ad blocking as well, another common digital trait of GenYs.

“Our Hero units with branded content perform exceptionally well,” he said. “Readers are 2.22 times more likely to engage with the Mic Hero when it is surrounding branded content. That number jumps to 2.7x on mobile and 3.14x when the campaign is running an interactive Mic Hero.”

Mic has proven that its generation is serious about serious news. … do they think their mostly millennial audience would seriously consider paying for Mic’s content someday?

“We don’t currently directly charge readers for content, but it’s not something we’d rule out,” he said. “We generally don’t believe that a complete paywall model is realistic in today’s media landscape, especially for a new player, given how content is distributed. That said, there is definitely an opportunity in the deep and niche reporting world for a subscription model.”