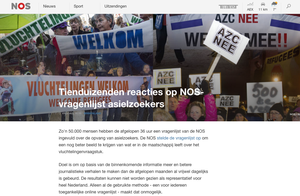 The Dutch broadcaster wanted to solicit the views of the average person on asylum seekers and refugees, rather than those on the extremes, says van der Parre. “Extreme views are easy to find,” he says, “they are the protestors on the streets or the volunteers.”

The main question on the online questionnaire, was: “Maybe you’d like to share something about asylum seekers: your feelings, your opinion, your experience?”

The response was overwhelming: around 50,000 people responded within the 36 hours the questionnaire was available online. Editor-in-Chief Marcel Gelauff said the enormous response indicates how much the issue is on people’s minds, and how divided public opinion is. Latest figures show that The Netherlands, a small, populated country of almost 17 million inhabitants, now houses 46,609 asylum seekers, double the number of 2014.

While critics suggest the questionnaire is largely unrepresentative, van der Parre argues they are not looking for statistics, but for opinions. The questionnaire results will not be published as such, but fed into the daily editorial line to improve overall migration coverage. It is also a way to source interviewees, as at least 7,000 respondents left their contact details to participate in for a potential TV or radio piece.

Grasping public opinion on the ongoing housing question
The focus of the questions is on the issue of providing accommodation for asylum seekers, with which authorities have struggled since the number of arrivals increased rapidly last summer. Setting up crisis accommodation has stirred up turmoil and led to fierce protests in some towns.

Participants are asked if they would be “for, against, or agree under certain conditions with” the arrival of asylum seekers in their neighbourhood. It then proposes a selection of reasons to choose from, such as the Netherlands signed the Refugee Convention and thus asylum seekers have a right to be sheltered, there are already too many foreigners in our country, it is good for the local economy, and so forth.

There has also been a lot of understanding towards the situation of asylum seekers says van der Parre, who indicates that most supporters said the Netherlands is morally obliged to help people fleeing war, and that their town or city should make its contribution.