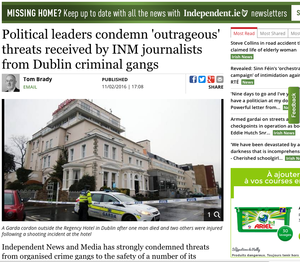 The group, which publishes the Sunday World, Irish Independent, Sunday Independent, Herald and independent.ie, has strengthened security measures following formal notification from the Irish Police that a number of reporters’ safety was at risk. Neither the police nor INM disclosed the names of those threatened.

“All our journalists are showing solidarity towards their colleagues who have been notified of threats,” INM Managing Editor Edward McCann told the World Editors Forum.

Group Editor-in-Chief Stephen Rae said, in a statement, that the personal security and safety of his people was the group’s utmost priority, and the outside security consultants had been hired to provide risk assessments.

There have been previous threats to journalists in Northern Ireland and within INM, but the current situation is exceptional. The level of gang-related violence exploded recently to a point where it had in some instances overshadowed the General Election campaign, said McCann.

The police did not provide details on the level of the threats but McCann confirmed they were continuing. “The reporters concerned are being given expert advice and security measures are in place but they are continuing to do their work,” he added. “It is entirely up to them whether they run their bylines or continue to work. Their safety is obviously of paramount concern.

“But journalists are journalists, we are well aware that things can happen, and obviously also very aware of our role in society, and the importance of exposing wrongdoing,” McCann said.

The threats have arisen as the 20th anniversary of the death of Sunday Independent journalist Veronica Guerin nears. She was shot dead by members of a drug trafficking gang in Dublin because of her incisive, continuing investigation into Ireland’s criminal underworld. She was targeted repeatedly for physical attacks, a shooting and death threats. Her murder sparked public outcry and led to new legislation.

INM has, with the permission of the affected journalists, decided to make the threats public in order to highlight the danger posed to the media. “Our media Group will not be deterred from serving the public interest and highlighting the threat to society at large posed by such criminals,” Rae said in a statement.