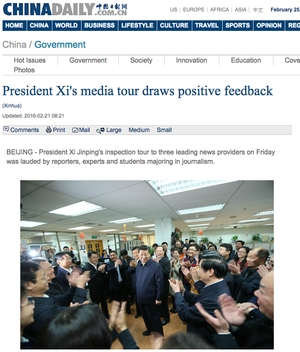 “It’s a retrograde decision that is consistent with China’s effort to exert control over the flow of information domestically,” said Brauchli, who was the former managing editor of Washington Post and Wall Street Journal’s foreign correspondent in Asia.

As is normally the case with most Chinese regulation, the vaguely worded terms do not have further details, nor specify how such restriction will be enforced. While this is a blow to the already highly restricted environment in which foreign media companies operate in China, some say it will have limited impact. Others suggest it may even potentially be a boost in foreign media’s credibility in the long run.

In an age where everyone can be a publisher, rules such as these may be difficult to enforce, and the government is “fighting both market forces and technology,” said Ying Chan, Director of the journalism program at the University of Hong Kong, in an interview with Quartz.

Due to the sensitivity of the issue, foreign media editors in China have refrained from answering questions about how they may be affected, though some have hinted that it will most likely be business as usual.

“From a practical standpoint it is not much different,” said Paul Gills, a visiting professor at Peking’s Guanghua School of Management, in an interview with the Independent. “But a lot of what might have been common practices before are being put into legislation so China can argue it’s operating under the rule of law.”

The new rule may also have an adverse effect, especially regarding trust. “It reflects increasing level of anxiety around the ability of the state to control society. History shows that the more restriction there is, the more people will be interested in seeking outside news,” said Brauchli citing examples from the restricted era in Russia and East Europe.

“Whenever governments throw up restriction, it means domestic news can’t compete with international news, and it signifies that domestic news is mostly skewed,” said Brauchli. “China is actually hurting foreign media from the business point of view, but not hurting them in terms of credibility in the long run.”

Despite the difficulties, many foreign media still have a Chinese following. The Financial Times claimed to have two million registered Chinese readers. The Economist’s new Chinese news app Global Business Review attracted nearly 300,000 downloads from China in the first six months of its launch last year. Though blocked by the authorities, the New York Times claims to have tens of thousands of Chinese visitors to its Chinese website via virtual private networks.

The directive is a continuation of the Chinese government’s tightening control over the digital sphere. Last year, the country formally announced that monitoring the Internet is part of national security, and plans to set up “network security offices” in major Chinese social media technology firms to stop “illegal behaviors”. In December, a well-known human rights lawyer Pu Zhiqiang was given a three-year suspended sentence for seven sarcastic posts on Chinese social media sites.

In a show of how important media is on his agenda, the Chinese President Xi Jinping made a high-profile visit to the top three state-owned media outlets last Friday and emphasized the importance of “positive reporting,” before live recording an audio lantern festival greeting on social media to the subscribers of Xinhua News Agency.