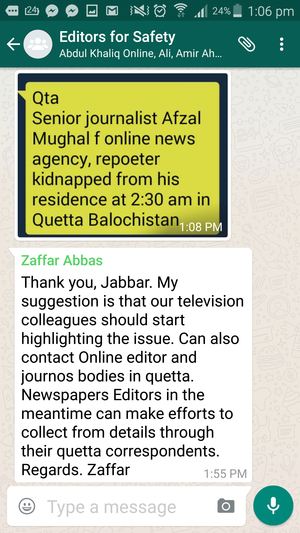 Afzal Mughal, a Pakistani journalist from a small newspaper in Quetta, the capital of the Balochistan province, was abducted, in the early morning of November, by a group of armed men who broke into his home while he was asleep. Normally, stories like this don’t make the front pages in Pakistan, which ranks as the sixth deadliest country for journalists according to the Committee to Protect Journalists.

But the new “Editors for Safety” initiative made all the difference. Instead of letting the case go by unnoticed, a message went out to a new Whatsapp group for Pakistani Editors, informing them of the kidnapping. In less than five minutes, 21 television channels were running the story. Its widespread dissemination even had international broadcasters, such as NBC, pick up the news.

“Within half an hour, he was back home, albeit badly battered,” Abbas, one of the key conveners of the group, told the World Editors Forum. “The government was rattled and the home security department stepped in to inquire.”

Formed in 2015 with the support of the Open Society Foundation, “Editors for Safety” has a single philosophy: An attack on one journalist is an attack on the whole industry.

Quick, easy communication to streamline media coverage
The Whatsapp group facilitates communication between editors, indicating how the details of an attack should be treated; whether to immediately publish or to hold details because negotiation is still ongoing. Almost all major newspapers and television stations in Pakistan are participating. And plans are made to include smaller newspapers, which are often the most vulnerable.

Despite initial reservations expressed by several editors about the initiative, six months in, Abbas began to see hope when rival television channels broadcasted kidnappings of journalists from competing stations. “They hated each other,” said Abbas. “But they were having breaking news about the other’s reporters’ kidnapping.”

“We have nothing to do with rivalry and politics,” said Abbas on the principle behind setting up the group. “Our point is about journalist safety.”

Media coverage is crucial to keeping journalists safe
The new initiative could be a sign of better times ahead, as addressing safety is a crucial step forward. But until the government and security forces tackle the issue of impunity, the threat of injustice will always be true. In Pakistan, 57 journalists have been reported killed since 1992. In 94% of cases, there has been complete impunity for the actors who committed these crimes.

Even though the attention on ending impunity often focuses on the Member States of the United Nations, editors are increasingly criticized for the lack of coverage of attacks on journalists.

“The main reason for the lack of coverage is often competition and the different interests of media owners,” said Abbas. “In the past, if news organizations were to report on attacks or the disappearance of journalists, they would often not include the name of the publication or the name of the journalist, which makes the issue faceless.”