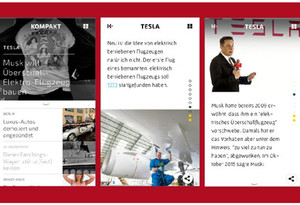 In this excerpt from our recent report about all of the World Digital Media Award winners, WAN-IFRA contributing writer Steve Shipside describes how the app came about and the impact it is having so far.

WELT KOMPAKT is the brainchild of Axel Springer SE – one of Europe’s biggest publishers and home to flagship titles such as Germany’s BILD and DIE WELT. Importantly, the company has long seen the value of multimedia, and digital media now represent 50 percent of its revenues. WELT KOMPAKT comes from its own internal start-up culture.

WELT KOMPAKT sprang from DIE WELT, Springer’s flagship newspaper. The parent paper is a broadsheet in the classic mode – originally modelled on the Times of London. Like many broadsheets, however, it doesn’t necessarily appeal to younger audiences. Hence the publishing of a compact edition, WELT KOMPAKT, a 32-page cut-down version of the main broadsheet, which launched in May 2004 and aimed at a younger demographic.

Ten years later, WELT KOMPAKT launched on iOS, and whereas the KOMPAKT paper edition was a cut-down version of the parent paper, the iOS app is an entirely new product, created purely for mobile and enjoying massive success among a user group that does not buy print.

Stories are short and presented in a card-style approach with users encouraged to respond to them much as they would a Tinder-style dating app. Swipe Left to dispense of subjects that aren’t of interest, swipe Right to be presented with more of the same. Swipe vertically to drill down and read more. Because the format fits the mobile so well, and because the card style is well suited to memes the content enjoys very high sharing rates.

Users who are interested in shared content from app users, but who don’t have the app themselves, are directed to a responsive website. Most interesting of all is the comments system, which helps simplify commenting by auto suggesting the most frequent comments, and letting users see what others said in the process. The meme approach extends to the comments system as well, transforming simple, fast comments into meme-style images that are in turn very shareable.

As of October, the app has been downloaded more than 150,000 times since it was made available on the 10th anniversary of the paper (May 2014). In addition, Apple named KOMPAKT one of the best apps of 2014. Fifty percent of users are under 30.

‘The goal was to do things differently,’ an interview with Dirk Nolde

Dirk Nolde, who led the KOMPAKT mobile project, describes himself as an Editorial Owner – “I’m part of the editorial team but work with product development. I do both website concepts and journalism, so I’m kind of a hybrid editor/product manager.”

WAN-IFRA: Where did the idea come from?

Nolde: “I’ve always been a journalist, but then two years ago I was part of a new unit in Axel Springer – an internal start-up accelerator developing new journalistic products. The goal was to do things differently, and we had half a dozen projects that became start ups ranging from celebrity coverage to football. One of those was KOMPAKT. We were trying to deliver a different form of journalism, and my involvement was to research the concept and head up the project. This was, as always, a team effort. I developed the idea together with my colleague Ulrich Machold and after the product hit the market, I directed it as editor in chief and head of product development.”

“On a trip to Palo Alto and San Francisco in 2013, we saw things like Yahoo Digest and Potluck [a social network] and those apps did something new in that they turned news into a stringent new form. We didn’t have that at the time – we had the usual breed of news websites with a mobile variant but they had the same content across them all. While we didn’t do any specific market research, we had a pretty good idea about the younger demographic and we felt that if we could get rid of the clutter the result would appeal to the always-on population.”

WAN-IFRA: How did the project develop?

“The goal was an app that was easier to digest, so we went for card-by-card news, usually featuring a map, a video, and two sentences and that clicked with people. It can be a bit like Tinder with swiping things that interest you and swiping vertically if you want to dive in. All the way the idea was about breaking things down to make it shorter and more to the point and that really appealed to a younger demographic.”

Did the journalists have any resistance to the new format?

“No, none. The KOMPAKT mobile app was a totally separate form from DIE WELT and very much a product of the Axel Springer accelerator so there were no cultural problems.”

Was it hard to implement technically?

“No, it was relatively straightforward. Creating an iOS app isn’t easy, but we had a developer team working in Poland. I guess we imagined at the beginning that it would be easier than it proved to be, but I can’t say that it was hard because the development team were really great, and we got huge support from Apple.”

What stood out in particular for you about the project?

“The comment system. We weren’t aware of just how creative our readers would be when it came to including a bit of obscene language, so we had to get clever and create a constantly updated blacklist. There is also a semantic engine to help exclude words.

Then we wanted to simplify comment so there is a template-like system, which means you only need to fill in a word – so you might get ‘I think this is a…..’ and you add your comment while also seeing what most other people say about it. Then we wanted to make that very shareable so that the result looks like a meme and is easy to spot in your Facebook stream.”

Aside from the user numbers what are you most pleased about personally?

“As a journalist, I think I’m most pleased about the process, which is about being able to tell stories in a shorter and more to the point way. That is really something. On the one hand, DIE WELT has the big story from the foreign correspondent, and we have information specific to our user’s situation. With KOMPAKT, we have connected these to give people the content that’s right for where they are reading.”