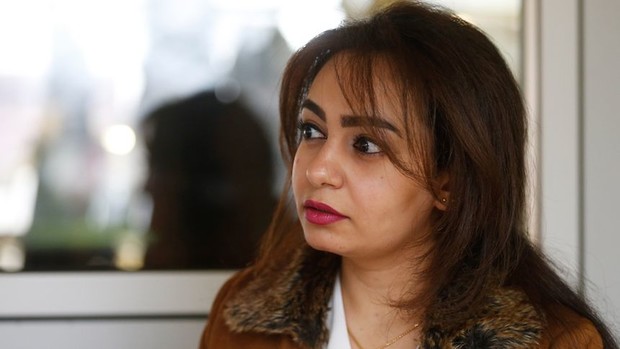 “They killed two of my friends in 2013. Then they were after me. I had already received death threats by phone from a private number. I was making a reportage with my camera man and driver when they shot my car in Baghdad. Immediately, I called my mother, who said: “that’s enough, we’re leaving.” From that point, I never saw my house again.”

Taking the “death journey”
Together with her mother, sister, brother-in-law and their two kids, Iraqi

journalist Hind Al-Harby left everything behind, fleeing to Turkey where they lived for two years. But they didn’t feel safe there either because there were talks about the Turkish government sending all Iraqis back to Iraq. At the beginning of 2015, when the Syrian refugees opened the way to Europe, they decided to take their chance, taking the infamous Western Balkan-route from Macedonia to Serbia, Hungary, Austria, and Germany, before finally arriving in Luxembourg.

Journalists under attack in Iraq
Iraq is the deadliest country for journalists, with 173 journalists having been reported killed for doing their job since 2003. The channel Al-Harby worked for, Al-Sharqiya (English: The Eastern One) is a privately held TV station, launched in 2004, and owned by media tycoon Saad al-Bazzaz. It offers 24/7 news and has great commercial succes with soap operas and reality TV.

It also covers stories of the Iraqi government clamping down on Sunni people. The channel has no permission to broadcast from Baghdad, according to Al-Harby, so transmission goes through offices in London, Egypt, Jordan, and other places. Its journalists are not allowed to film and interview people on the streets, she explains, which make them very vulnerable to police harassment.

”They were always after me, taking me to the police station, telling me that if I don’t leave this channel and this job, they will arrest me, or hurt me,” Al-Harby said. The fact that she was a female journalist, living freely added fuel to the fire. Not covering her hair and wearing make-up, she used to drive around in her own car, while – since the war – most women are veiled, don’t finish university and stay at home.

New beginnings in Luxembourg
At the foyer in Luxembourg where Al-Harby now lives with her family, she connected with local journalists covering the migration crisis, which led her to start writing about migration issues for the English publication “Luxemburger Wort.” Writing for western media, she feels more free. “I’m not afraid to write about anything; it feels very comfortable that no one is running after me.”

With regards to the media coverage on migrants and refugees, she says “No-one can describe the journey, even me, I cannot. It’s a feeling you can only understand if you’ve been through it: putting your family in a plastic boat, you’re in the middle of the sea, and you have nothing, just hope that you will arrive safely. And I even had to pay to feel this horrible.”

While Al-Harby is finally safe in Luxembourg, back home in Baghdad, the killings continue as “they [the police] are looking for the people who work in my channel,” Al-Harby said. Even this year, two of her colleagues at the channel were killed: