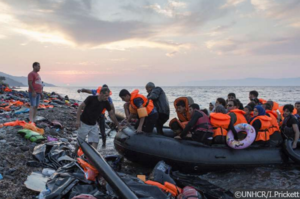 During the debate, scholars and refugee groups blamed the media for bipolar depiction, while media representatives pointed out legitimate concerns that need to be addressed, and pointed to the challenges that news organizations face in explaining such a complex political issue.

“The UNHCR has been fighting a battle just for humanistic reporting,” said Melissa Fleming, spokesperson for the United Nations High Commission for Refugees (UNHCR). “We found in our study that only a few media, in a few countries were reporting on the humanistic side, a lot of time reports lack context, contain mistakes and have security angles, often quoting the same sources and politicians.”

Helpless victim or dangerous criminal?
Dr. Jacco van Sterkenburg, Assistant Professor at Erasmus Research Center for Media, Communications and Culture in the Netherlands, said that the media coverage of refugees often falls into two categories; either a threat discourse, or a humanitarian one, but both portray refugees as “abnormal and different” and sometimes even “non-human.”

However, Aidan White, director of the Ethical Journalism Network which recently released a report “Moving Stories: International Review of How Media Cover Migration,” said that migration coverage in the media was much better than he had expected.

He stressed that there were legitimate concerns about a sudden influx of people, as people had the right to worry about their future, their children and their jobs. “If you only have one aspect, it’s imbalanced and dangerous,” said White. “You need to do both, but that should not be used to build fear and antagonism.”

White also pointed to  a communication crisis is happening in many democratic countries, where media was under pressure to follow populist rhetoric as politicians used hatred for their own benefits, and sacrificed principles for expedient economic solutions.

Media weakness was adding to the complexity, as the media’s capacity to report on difficult problems had been reduced by plummeting revenue, which meant less money for research, less time to report, less training and fewer specialized correspondents.

Partnerships to improve migration coverage
There was an opportunity though for better reporting on migration, suggested White, as he called for more effective partnerships between media, the refugee community and policy makers, to build a public information system that provides reliable and useful information.

“Publishers need to recognize that there is tremendous goodwill available to support media that want to do the right thing: report on this issue humanely, fairly and balanced,” said White. Regarding editorial independence, White believed that there were ways to partner up without compromising. The key is in the terms of negotiation or to have an intermediary who can help mediate between different parties.

The debate was part of the 60th meeting of the IPDC Bureau. More information on the event can be found here.