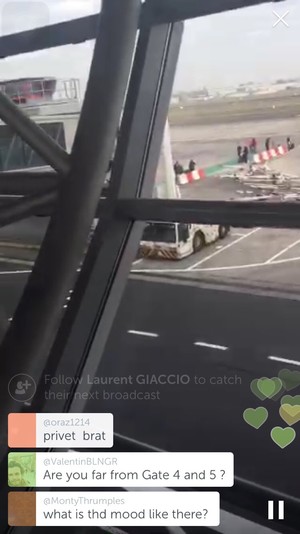 While television news stations were scouring social media for photos and videos, Periscope had direct access to live video from a passenger who was evacuated to a side terminal and had started sharing after the explosion went off.

The passenger would have been one of 10 million users who have downloaded Periscope since its launch a year ago, and today, collectively, watch 40 years’ worth of television on the app every day. It was awarded the best app by Apple last year.

With one simple click, users can broadcast to the world, unflitered, what they are seeing. They can also interact live with viewers who can ask questions, and show support by tapping on the screen to generate heart symbols. Videos can go on as long as the user wishes, and all footage captured on Periscope in the last 24 hours is available on a global map.

A powerful tool in breaking news events
The power of Periscope to revolutionize breaking news was evident in the first few hours of its birth, when Periscope users captured live video of a gas explosion in the East Village neighborhood of Manhattan, New York and live streamed it before any major news channels arrived on the scene.

The tool has been widely used by a diverse range of interests, such as Roger Federer showing the Wimbledon center court; Canadian astronaut Chris Hadfield explaining a space launch failure; BMW launching a new series; the White House showing the arrival of the Pope; churches broadcasting their services; and Peugeot conducting a live earnings call.

However, the power of the tool also means that inappropriate materials, like actions of crime, terrorist messages or pirated content can spread on the platform. “It’s a burden we carry,” said Beykpour when he addressed students at Paris’ Sciences Po Institute.

Emphasizing that Periscope is a platform for free speech, but that he wanted to put the best content representative of the brand, Beykpour said that his team is taking a proactive stance on prohibiting certain content such as pornography and crime. Other content, such as violence, is still up in the air as his team continues to work on a combination that is right. “It is a really difficult technical problem,” said Beykpour.

A useful broadcasting and sourcing tool for journalists
Periscope will not replace journalism, Beykpour said, instead it enlarges the reach and the audience of journalists.

“The beauty of a democratized platform is that the best content will be propelled further,” Beykpour said. “I think the most powerful broadcasts are done by journalists because they know how to ask the right questions and tell stories.”

In the past year, journalists used Periscope to conduct interviews with residents during the Baltimore uproar, and documented the migration crisis in Europe. This triggered new ways of reporting that were much more raw, direct and real than traditional television packages.

As Periscope prepares to celebrate its first birthday, Beykpour said he is not thinking of monetization yet as he continues to focus on growing Periscope’s user base. Twitter acquired the app before its official launch, so it did not have pressure to raise capital like most startups. “We cared more about the product going into the world faster and quicker than being the owners of a company,” explained Beykpour.