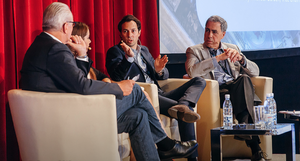 Blocking the ad blockers and learning from them 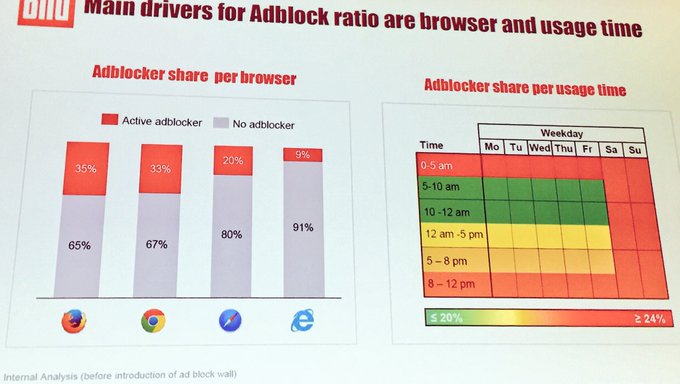 “We think publishers should really consider this model because this part of your user group is not helping you to monetise your content,” Betzold said. “You might annoy some of your users, but honestly, I think you will hardly notice.”

After three months, Betzold said the use of ad blockers on bild.de has dropped by nearly 80 percent, and that there has been a 10% increase in impressions on the home page.

BILD learned that readers tend to switch on blockers at different times throughout a day, for example, from midnight to 5 in the morning Monday through Thursday, and between 8 p.m. and midnight daily.

Not surprisingly, Peter Lammerhuber, CEO of Group M Austria and Chairman of the Board Switzerland, shared the same opinion of Betzold: block users blocking ads. The company conducted a survey in Austria about a year ago with 2000 users:

Like BILD, VG has used ad blocking as a true learning experience engaging with ad blockers to find out what types of ads users were willing to accept, for example, and walking them through the process of what ad blocking means to both parties. They did this through surveys.

VG engaging and educating ad blockersVG has taken some of the following steps as a result of their surveys:

Next the publisher is looking into server-side delivery of  ads, script tracking, continually improving the ad experience, what it means to paywalls, driving user to apps, how native ads might help, and a broader cooperation with Norwegian publishers.

In March, NYT joined a contingent of other US publishers in blocking readers’ access to content if they were using an ad blocker, like BILD, asking them to either whitelist the site or subscribe. “No publisher should pay an ad block provider to be whitelisted,” said Michael Golden, Vice Chairman of the New York Times.

One thing is clear, says Betzold:

“Ad blocking is not a mobile problem, it’s a browser problem, especially with Firefox and Chrome. I never thought I would stand on stage and say I like Internet Explorer.”

There are three real issues that come up about why users block ads: tracking, intrusiveness and load times.

To solve some of this, it involves engaging with all parties in the landscape; publishers cannot do it alone. For example, Betzold said: “Trackers are not a problem we (publishers) created. We have five trackers, including things like comScore. Media agencies have like 50 trackers. We cannot fix this alone.”

Naturally, Betzold said, advertisers want attention with their creatives so that has meant “blinking ads everywhere on our sites.” Again, that involves working closely with your clients to communicate what really works and how a news site can run amok, ultimately killing a (advertiser) brand’s opportunity to connect with a potential customer.