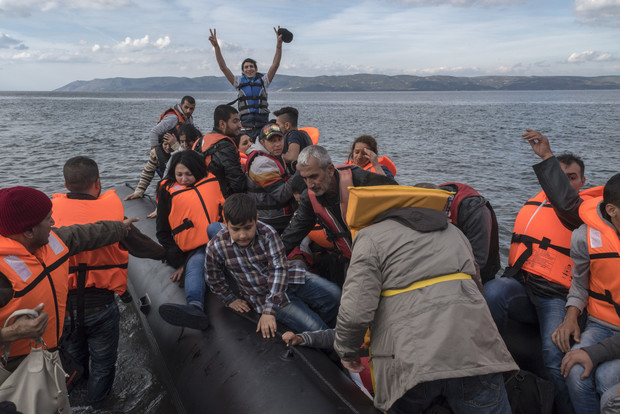 In a year as the Guardian’s migration correspondent, the 26-year old Kingsley travelled to 17 countries on the migrant trail, an experience he shares in his second book ‘The New Odyssey: The Story of the European Refugee Crisis‘ which comes out next month.

In his first big piece on the beat, he opted for a more human approach and followed a migrant on his journey from Syria to Sweden. “People got quite excited about it, because it was the first to do that,” Kingsley said, “The tipping point came late August, suddenly you saw lots of these type of stories about individual refugees in mainstream media.”

But well into 2016, these human stories may no longer keep our audience interested. “There has been an increase of more human reporting, but we have sort of hit a wall or dead end. People need to think of different ways of attacking the story and perhaps focus a bit more on how refugees are getting on now in Europe.”

If not emotional stories, what kind of coverage do you envisage?
“I believe more coverage needs to focus on the practical issues, because after a certain point the human coverage isn’t necessarily getting through to more people. Maybe some people might be more convinced by more pragmatic coverage.”

What kinds of stories do you expect in the (near) future?
“We’re starting to see more coverage on integration stories. What is it like to live in a German village, trying to integrate, and applying for asylum? We will also see a dying down of migration coverage in general. Because of the EU-turkey deal, there isn’t this story of people on the move to quite the same extent. So there will be a decrease in the amount of coverage that we’re seeing, and a focus on the integration aspect of the story rather than movement of people.”

Even though people will still be coming to Europe?
“Since the EU-Turkey deal was done, the numbers have fallen. While many, including me, have argued that people will just go by the routes, we’re not going to see a million people arriving by boat this year – this will reflect in the coverage, because it won’t seem such a pressing issue. Obviously, it is a pressing issue that 50,000 people are still stuck in Greece, but people get bored by that story.”

“While numbers going through Libya, Italy, and Bulgaria may rise, they won’t rise to the same extent as they did in September and October last year. This will reflect in decreasing interest of newspaper editors who have already reached sort of a saturation point when it comes to seeing this as a human issue.”