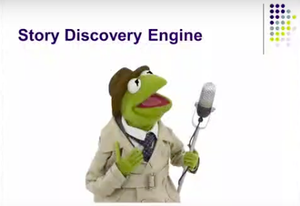 If you want to know which candidate is most likely to win this year’s US presidential election, check PollyVote.com. This project runs algorithms, using evidence-based forecasting principles, on data that is continuously fed into a system. PollyBot algorithms then identify, write and publish news stories to the site’s news pages.

Andreas Graefe, a Tow Center fellow, who wrote the “Guide to Automated Journalism” spoke about PollyVote and other developments at the cutting edge of artificial intelligence in journalism at the International Journalism Festival in Perugia, Italy, last week.

“The more data you have, the more possibilities and the more sophisticated your stories can become, but also the more complex it will be to actually define the algorithms,” Graefe said. He defines automated journalism – or so so-called robot journalism – as having algorithms or software write stories, based on data, without human intervention.

Automating journalism is a human task
This is not to say that there are no humans involved in the process, on the contrary. “Many people seem to forget that algorithms are programmed by humans. Everything the algorithm does has been created by humans, and they are maintained and continuously refined by humans,” said Graefe.

That is why “it is crucial for journalists to remain involved in the editorial decisions around the development of those algorithms,” according to the Associated Press’ News Automation Editor Justin Myers, who was also on the panel. The news agency has been a pioneer in using automated journalism and has proven that using algorithms can be a very efficient, accurate and economical way to produce highly repetitive stories, for which good data is available.

The AP uses the Wordsmith software from Automated Insights, which has now become publically available for anyone to use. James Kotecki, AP’s Head of Communications told the World Editors Forum on the phone last week that the tool “almost always automates those tasks that journalists didn’t like to do in the first place, to free them up to do more interesting, more rewarding parts of their job”.

On top of that, “so much of what we do is creating content that could have never been created before,” added Kotecki. “Only with automation does it make sense to make a thousand versions of a story that are specifically targeted to individual audience members, rather than producing one story for a large audience.”

The next level: automating journalistic processes
The technology can do much more than filling in the blanks of narratives pre-written by humans. It can be used to automate newsroom processes, such as generating print graphics, knowing when and where to publish content, verifying user-generated content, researching subjects and receiving alerts on important happenings.

One example is the Story Discovery Engine, developed by Meredith Broussard, a computer scientist turned data journalism professor at the New York University.

The tool uses artificial intelligence to “quickly and efficiently generate new investigative story ideas using public affairs data,” she explains. It compares what should be (laws and policies) – to what is (data) – and visualizes the data in a way that enables journalists to detect abnormalities, which may well be leads into stories. This sophisticated usage of automated journalism enables journalists to be proactive, rather than reactive in coming up with story ideas.