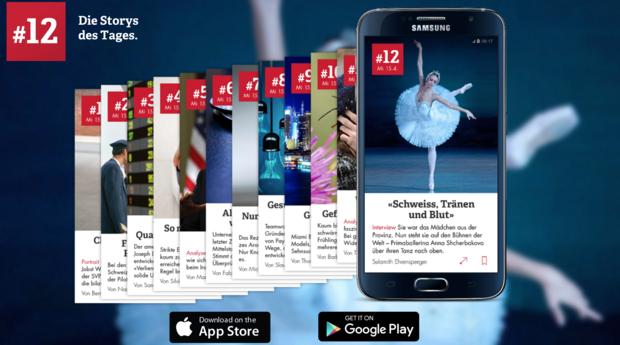 App #12 follows a popular concept these days, which is curating the most important news for readers and pushing to them once a day a visually attractive curated edition.

This is something other publishers have been exploring the past couple of years with other examples such as The Economist with Espresso, The News York Times with NYT now and France’s Le Monde with La Matinale app, to name just a few.

But Tamedia is adding its own touch to this type of news offer.

The first addition is the variety of the content as the small editorial team (1.5 FTE) in charge of the app is hand-picking 12 articles a day from the +20 newspapers and magazine brands of Tamedia.

Articles from Women’s magazines, regional newspapers or the flagship news brand of the group Tages-Anzeiger, are repackaged with a stylish mobile design.

The second addition is that #12 app is pursuing two parallel business goals: on one hand it’s trying to convert users to subscribe to the app and on the other hand it’s rewarding the readers that are already paying for one of the group’s titles by offering them the app for free.

“We consider the app as an added value to some Tamedia publications. Everyone else pays 6 CHF per month. What we call a Spotify pricing,” says Michael Marti, head of digital at Zurich-based newspaper Tages-Anzeiger (pictured).

The news App #12 was launched in October 2015 on iOS (after a year of incubation) and this February on Android.

“The app has reached some 35,000 downloads, and we have 15,000 daily users. Ten percent have converted to paid subscribers. We need about 2,400 subscribers to break even,” adds Marti.

The app is not opened to mobile advertising but could consider a sponsoring model in the future.

Within Tamedia, #12 is considered “a journalism laboratory.” One of the reasons is that the rating system embedded in the app asks readers if they liked a story or not. This daily feedback is then processed and used to refine the articles and topics’ selection.

“We are getting between 2,000 and 3,000 ratings for each daily edition, and it has helped us improved the app content,” Marti says. “So far, the level of satisfaction is very high around 80-90 percent.”

The measurement system uses a simple “yes/no” like button at the end of the article, and this rating is combined with the measure of screen views.

“I think that with #12 app we have created an open dialogue on ‘quality’ that can increase the readers’ satisfaction. We are thinking about how we can do similar things on our other news platforms” says Marti.

Tamedia is also considering the possibility to expand this concept to verticals (e.g sports). But as Marti says, it should be topics that are broad enough because the Swiss market is small.