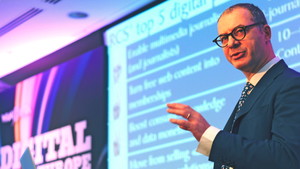 (This post is adapted from the recently published WAN-IFRA Report, “Alternative Revenue Streams for News Publishers.” Information about ordering/downloading the report is available here.)

Former RCS Chief Marketing and New Business Officer Alceo Rapagna says the company’s e-commerce operations, though not financial blockbusters, provide three significant benefits: “One, they bring in additional revenues. They will not change our fortune or our destiny, but it’s an additional revenue stream. Two, you are giving service to your readers, so you are increasing their loyalty… Three, we are getting data. We are getting a ton of information about our readers that we wouldn’t have had the chance to capture just by serving content.

“Every transaction, every shopping cart that’s abandoned, every visit to our vertical e-commerce pages gives us information about the interests of our readers that is of course fed back into our CRM databases, into our advertising systems,” he says.

Stronger reader loyalty and deeper knowledge about their interests indirectly boost the bottom lines of the company’s publications, Rapagna says.

Revenue from RCS’s e-commerce operations has grown “astonishingly” to about 10 million euros per year, he says. However, that must be seen against total revenue of 1.28 billion euros for the Italy-based company in 2014.

“While RCS e-commerce income has grown 40 per cent per year, still, unless your name is Axel Springer or Schibsted or Burda – people who have invested hundreds of millions to build new digital businesses – then it’s very difficult to get to a size that is a game-changer,” says Rapagna.

(Burda some years ago acquired a 30-percent stake in an e-commerce pet-supplies site called Zooplus. “In 2011, Zooplus generated 245 million euros in sales, a sizable chunk of Burda’s 2.2 billion euros in total revenue,” according to a January 2013 article on nytimes.com. In early 2015 the German publishing giant announced it would dispose of its holding because it did not fit into the company’s business strategy.)

Rapagna says RCS is not making a “significant investment” in e-commerce, and he urges publishers to be “very careful” when investing. He cautions, “A lot of money is needed for customer acquisition. Also, the profitability is lower than advertising.”

He says, “So far we’re doing e-commerce as part of a portfolio of non-core initiatives, including a marketing agency, doing events, doing content marketing.”

At Digital Media Europe 2014, Rapagna told WAN-IFRA Director of Insight Dean Roper that RCS’s decision to invest in e-commerce and other non-core initiatives stemmed from “the realization that the traditional publishing business models weren’t enough to sustain growth of the company.” Print revenues were declining, and conventional revenue streams from online publishing were not growing quickly enough, so “we needed to do something different,” he said.

From editorial brands to consumer brands

When the company examined its assets, “We suddenly realized that our brands were so powerful that they could stand to be stretched a bit into services,” he said. “We started to expand our brands from purely editorial brands into consumer brands.”

The company discovered, “Notwithstanding the power of the brand, the offer must be distinctive. If you want to keep consumers from just looking at what you offer in e-commerce, and then browsing on the Internet in search of the best offer, you need to be distinctive,” he said.

With that goal in mind, RCS is implementing three different strategies:

“One is what they call ‘editorial e-commerce’, an offer that is in the spirit and the tradition of the brand. We call it ‘collateral business’ – videos, books, etc., but on the Internet,” said Rapagna.

He continued, “The third one is what we call ‘contextual commerce’. While preserving the boundaries between quality journalism and marketing, we try to build editorial contents that naturally lead to offers. For instance, if we describe how beautiful Tuscany is with a nice editorial piece, we also give readers the opportunity to choose from the best hotels, the best locations, in Tuscany. This is service.”

Most order processing is outsourced

RCS handles presentation of the products on the web, where the user/consumer can get information and can click to order them. From the moment an order is placed, the process leaves the responsibility of RCS and is handled by one of several specialized companies with which it has an agreement. Those agreements take various forms, from joint ventures to commercial contracts and others.

There are only two exceptions to that type of arrangement, says Rapagna: “They are what we call our editorial stores, places you can buy past issues or books, special editions or digital products from our publishing house. When the product originates from RCS editorial or publishing, we operate the logistics, because of course that’s what we do also in the physical channels. Those are the Corriere store and Gazzetta store.”

The Corriere storeDespite the heavy use of outsourcing, “In general we try to keep the customer relationship, so the payment is on our system… We can keep the record and better understand consumer needs and interests, so we can do marketing out of it. And from the accounting standpoint, we like to show we have ‘100’ in revenue and ‘10’ in margin, for example, instead of just showing the ‘10’,” he says. “Of course, it’s just a statistic – the margin is the percentage we can take out of it – but we like to show the full revenues, instead of just a fee or commission. Of course it also increases our negotiating power with the partner we are working with.”

The fact that so much of the e-commerce operation is in the hands of business partners dramatically reduces the need for personnel at RCS. In fact, the e-commerce staff consists of only four people. “Then we have another team,” he says. “These people belong to a small startup we acquired – My Beauty Box – doing cosmetics. My Beauty Box is one of the few remaining companies in Italy that do what Birchbox does in the USA, or the Rocket Internet guys try to do [with Glossybox in Germany]. So in that case we bought the company, and the staff aren’t on the books of RCS but of that company.”

Rapagna says sports is an area where RCS’s e-commerce operations are doing “fairly well. We have several e-commerce initiatives around our sports brands – our sports dailies in Spain (Marca) and Italy (Gazzetta dello Sport). One is not technically e-commerce but betting; we have created our own betting offer.

“We have partnered with a special e-commerce player in sports and have a brand called Football4U, selling football merchandise – jerseys and shoes. We also have Cycling4U, for the passionate about cycling, and we are experimenting with fantasy gaming where you buy and play virtual championships in soccer and basketball. For that we have partnered with a startup called Dunkest, which is an interesting and growing startup active in basketball fantasy games.

“So in sports I would say the association between content and commerce works very well. We have also developed some algorithms, some technology to match the content of an article with a catalogue.

Another example involves IO Donna, the weekly women’s news magazine of Corriere della Sera, and its web site. The magazine signed a commercial partnership with Zalando, one of the largest online fashion players in Europe. Launched in November 2015, the IO Donna/Zalando store “is like a store within a store,” says Rapagna. “If you are on the IO Donna website, then you can get into a special section that is ultimately in the Zalando catalog but enhanced editorially with some selections, some items chosen by the editors of IO Donna,” he says. Also, some items in Zalando are offered at a special discount only for IO Donna readers.