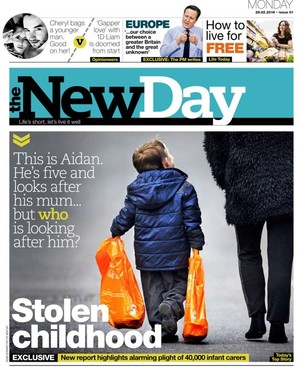 The publication’s niche-focus, the 30p increase per issue in the second week of printing, and its feature focus meant The New Day was handicapped from the start. On top of that, the exclusively print-focused project had nearly no social media presence.

“That may have been the final nail in the coffin of what I thought would be a successful newspaper for the UK market,” Mario Garcia, media consultant, designer and teacher at Columbia University’s School of Journalism, told the World Editors Forum.

“Though publications such as the Daily Mail and Metro persist as strongholds of print media, the incorporation of an online model remains essential for any modern newspaper. The New Day’s disregard for these advantageous mediums, such as phones, tablets, and computers, indefinitely eliminated a large segment of the potential audience.”

“Perhaps they counted on the print faithful to succeed, but that audience is NOT big enough,” Garcia explained. “A title must have a strong presence on all platforms: the news when you want it, where you want it, how you want it..”

Mario Gracia will share more details at WAN-IFRA’s 23rd World Editors Forum in Cartagena, Colombia, this June when he will moderate the session on next level storytelling: how the shift to new platforms and formats is bringing new dimensions to journalism – and how print products are responding.

Closing down after only nine weeks in business?
Amol Rajan, editor-at-large at the Independent, said he felt sympathetic for the people who worked at the paper but it was the right decision to close. “If it’s not working out to pull out quickly, rather than linger on and go through a slow death,” he told BBC Radio 4’s Today programme. “The New Day was not a news-led product – it was a features-led product. In that way it was unique but it was not a compelling proposition.”

Shame. Anyone who has the courage to launch a new paper should be applauded. Good luck to the staff. #NewDay https://t.co/0ZdA6kJ5P9

George Brock, Professor of Journalism at City University London cited the quick increase in cover price as a contributing factor to the newspaper’s rapid departure from media stands. He noted the publication’s launch “into a suddenly nervous and pessimistic market” as advertisers rapidly migrate to a digital interface, and questioned the marketability of a daily publishing model for feature stories, wary of The New Day’s ability to infiltrate a long-established hard news market.

A very niche target groupe
Both Trinity Mirror CEO Simon Fox and editor of The New Day Alison Phillips identified The New Day as a publication for readers who had otherwise given up on traditional print newspapers. The publication’s target daily sales of 200,000 copies looked steep from the get-go.

Even before it launched, respected columnist and ex-editor Peter Preston had expressed his concerns over the niche target group of middle-aged UK women. In his column for he said The i, a successful publication, had an average reader ratio of 60:40 of men to women and only one UK newspaper (The Daily Mail) reached more women than men. The New Day’s average sale of only 30,000 copies daily, quickly placed the publication in debt.