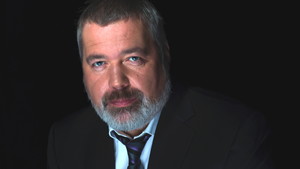 The award, presented in Cartagena, Colombia during the opening ceremony of the 68th World News Media Congress, 23rd World Editors Forum and 26th World Advertising Forum, recognised Muratov’s leadership and outstanding perseverance in safeguarding Novaya Gazeta’s independent editorial line, as well as the great sacrifices made by its staff, over the paper’s many years of service in the cause of press freedom.

“I would like to express my appreciation to WAN-IFRA for this award, coming as it does 10 years after your Moscow conference where Mikhail Gorbachev announced he would assist the development of our newspaper,” said Muratov, speaking in a pre-recorded video address from Moscow.

He continued, “Only 5 percent of the population in this country understand the freedom of media as a prime, core value, while about 80 percent believe the main problem in Russia is poverty. Very few associate the two. Without freedom of speech, there is no way out of poverty. Freedom means that there is control over corruption and the state, which means that it impedes poverty. I believe your award will help us to further follow this way.”

Muratov was unable to travel to collect his award in person because of his ongoing recovery from a recent illness. Accepting the Golden Pen of Freedom on his behalf, Sergei Sokolov, Deputy Editor of Novaya Gazeta, said, “In the last 16 years, Russia has been sliding, corrupted and oligarchic but still a democratic society, into a darkness of rigid autocracy, which has surely affected the freedom of speech and media.

“Journalists are constantly attacked and the reason is the system of impunity that has developed.

Businessmen, corrupt law enforcement officers and officials know that if they order the death of a journalist, they will get away with it.

Independent journalists are living this way in Russia now, but I can only be proud of the fact that I am working with them and am honored to be a friend to them,” Sokolov said.

“In recognition of Dmitry Muratov’s vision and leadership, and in acknowledgement of the courage, determination, and professionalism of those who – at great personal sacrifice – keep the flame of freedom burning and the independence of the press alive in Russia, we stand in appreciation of the work of Novaya Gazeta,” said World Editors Forum President Marcelo Rech, in presenting the award in front of more than 700 publishers, chief editors and other senior newspaper executives from around the world.

“Despite the Kremlin’s success in marginalising independent reporting and the levels of violence and impunity media professionals face in Russia, Novaya Gazeta continues to wield considerable influence with its uniquely uncompromising editorial line,” Rech said.

WAN-IFRA has presented the Golden Pen of Freedom since 1961 to recognise the outstanding action, in writing or deed, of an individual, group or institution in the cause of press freedom.

The only critical voice with national influence

Novaya Gazeta has been described as the only truly critical voice with national influence in today’s Russia, and is known for its in-depth investigations on sensitive issues such as high-level corruption, human rights violations and abuse of power. With such notoriety comes the ‘reward’ of rarely escaping the invasive eye of the authorities and their all-powerful board of censors.

Muratov and some 50 colleagues founded Novaya Gazeta in 1993 with the goal of creating “an honest, independent, and rich” publication that would influence national policy. Former Soviet President Mikhail Gorbachev donated part of his 1990 Nobel Peace Prize award to pay for the early expenses. While Gorbachev remains a shareholder today, the majority stake in the company now belongs to the editorial board of the paper.

Six journalists killed in retaliation for their work

Tragically, Novaya Gazeta has paid the heaviest price for its investigative and pioneering work worldwide; six of its journalists have been killed in retaliation for their work or have died under suspicious circumstances, and many of its staff receive regular threats.

The most prominent casualty was investigative journalist Anna Politkovskaya, who gained international recognition for her independent coverage of Chechnya and the North Caucasus. On 7 October 2006, she was shot and killed in the elevator of her block of flats. Those responsible for ordering her killing have never been identified.

WAN-IFRA remains deeply concerned by the deterioration of media freedoms in Russia over the past decade-and-a-half. State ownership of the airwaves and close ties between government officials and pro-government media ensure significant uniformity with the official version of events. Censorship and self-censorship is reportedly common among state media employees, while independent media face heavy restrictions on what they can cover.

Access to official information is, in practice, extremely difficult to obtain and independent critics are increasingly harassed and persecuted. Many of these are journalists. Violent attacks have steadily increased, while tragically, 56 journalists have been reported killed in Russia since 1992. Impunity for the killers in these cases stands at nearly 90 percent.

“Despite the challenges, despite the worsening situation for the independent press and the unimaginable pressures facing the paper at every turn, thankfully Novaya Gazeta remains with us,” said Mr Rech. “Today, the global media industry stands in recognition of its crucial work.”