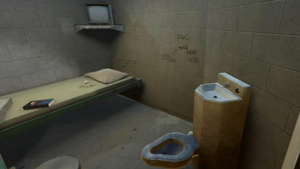 News companies are experimenting with virtual reality and looking for subjects that suit the medium. What’s perfect is a static camera in a clearly defined space, with no humans to disrupt it.

That is perhaps the reason why three news companies have done three different projects on the same topic.

The news upstart RYOT was the first to experiment with a simple 360-degree video of a prisoner’s cell with audio effects.

Focused from the start on positive social action, RYOT has since being bought by the Huffington Post, and pivoted to focus entirely on VR and immersive storytelling.

But for some, 360 video is not true VR. The Guardian had bigger plans for an interactive experience – actually building out a photo-realistic 3D space with the help of a special effects company and integrating audio stories from real inmates. It was not cheap, taking nine months to develop, but was supported by related organisations like Frontline and Solitary Watch, as well as the Google News Lab. The true experience requires downloading the app, but it can be seen here as 360 video in YouTube. Like RYOT’s project, it works much better on your mobile using Google Cardboard or similar.

So for the perhaps the first time in history, we have two fantastic immersive simulations of life in solitary confinement.

But they are not alone. Recently the Globe & Mail previewed its VR documentary ‘Surviving Solitary’ at Toronto’s Hot Docs Film Festival, striving to develop the first virtual reality project by a Canadian news organisation. The result is similar to The Guardian’s project. According to J-Source, “Looking at certain objects in each cell—a bed, the door, a plate of food—triggers an audio description from people who have been inmates in solitary confinement”.

With all this time and expertise involved in creating empathy, let’s hope there is some real impact on the prison system.