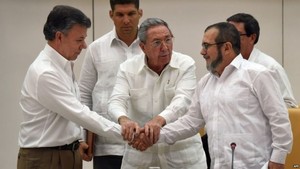 The Revolutionary Armed Forces of Colombia – or FARC – is Colombia’s oldest and largest left-wing rebel group and one of the wealthiest guerilla groups in the world. Created in 1964 with the intention of overthrowing the government, it soon moved into the drug trade to raise money for its cause. Since 2013, FARC has counted an estimated 8,000 fighters in its ranks.

Rebel control continues to be the highest in rural areas, especially in the south and east of the country. Journalists reporting there often face kidnapping, extortion, murder and self-censorship.

“There’s lots of fear when it comes to reporting in these areas,” says Pedro Vaca Villarreal, Executive Director of the Bogota-based Fundación para la Libertad de Prensa (FLIP). “Many journalists decide not to go because they’re scared, which means that the chances for locals to get information is reduced.”

Journalists often must ask permission of local FARC leaders before reporting in a given region, leaving their ability to report local happenings in FARC’s hands. Certain subjects may be off-limits, meaning only topics of war and conflict become publishable options.

“There are a lot of issues that should be discussed that are not,” says Villarreal.

In the last three years, since negotiations with FARC to sign a peace deal began, journalist safety has improved considerably, says Villarreal. The level of violence, including threats, kidnappings and murders related to FARC have decreased. However, journalists in the field say that since the ceasefire, there hasn’t yet been a noticeable change.

“Peace is a long process – it took years for the signature in Havana and after that, it could take years to put the deal in place peacefully,” says Edgar Osma, a Colombian cameraman who has been kidnapped four times by insurgent groups. “For now and in the next months, there are still many places where it is dangerous to report.”

The peace agreement will be put to a plebiscite, which will require 13 percent voter participation in order to be legally binding. Once signed, rebels will be expected to give up their weapons to UN monitors, moving towards their reincorporation into civilian life. A monitoring team will be set up to settle disagreements and report any parties not following the rules of the ceasefire.

While President Juan Manuel Santos said last month that he hoped to have the peace deal signed by Colombia’s 206th Independence Day on July 20, the date came and went. Bogota’s RCN Radio said the final signature could be expected in September, citing anonymous sources.

Until the nation votes on the deal and peace is in sight, journalists face the delicate task of reporting on FARC-controlled regions while respecting the ongoing peace process. While violence by FARC rebels has decreased, Villarreal says that this isn’t an indication that freedom of the press truly exists.

“There is a lot of fear about what is said or not said during the peace process,” says Villarreal. “If a journalist says something [incriminating] about a region, it could throw off the entire peace negotiation.”

That fear is what continues to contribute to self-censorship by journalists in the region. In addition, Colombia lacks a culture of critiquing its government or raising controversial issues.

And while an eventual peace deal with FARC rebels points to an improvement in press freedoms, there are other insurgent groups that risk slowing down the process to real peace. The National Liberation Army (ELN) has been responsible for much of the violence in Colombia, and was found responsible in May of kidnapping three journalists in the Norte de Santander province.

Press freedom and peace in Colombia may still be months or even years away, but the ceasefire and potential peace deal are a move forward for a country weary after 50 years of conflict. Media professionals say that things are moving in the right direction.

“Journalists are optimistic that change will come and that this agreement is the beginning of total peace,” says Osma. “There is hope.”