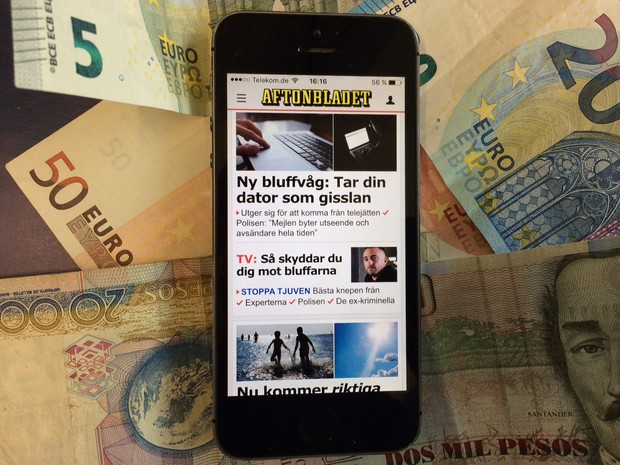 A few years ago, Schibsted Sweden forced itself to do just that when the company found itself in a situation not unlike many other news publishers today: They had plenty of visitors to their mobile sites, but no money to match.

Schibsted Sweden primarily works with the areas of Classified Growth and Publishing, and they have about 1,300 employees working for roughly 20 companies, including their flagship publication, Aftonbladet.

In 2012, Kvarnström said Schibsted had 86 percent of all mobile impressions on Swedish websites, (not including Google and Facebook), “but we didn’t have any money. So, we sat down and we thought ‘We need to monetize on all these users. We can’t wait for the media agencies, and we can’t wait for the advertisers. We need to do something about this.’ ”

“First of all, we changed our strategy. We also made it local,” Kvarnström told participants at WAN-IFRA’s World Advertising Forum, which took place as part of the World News Media Congress in Cartagena, Colombia in June.

She added that a typical advertiser for Schibsted in 2012, was a company like Telia, the largest telecom in Sweden and Finland, as well as the likes of IKEA, BMW and Unilever – all big name, international brands with the goal of reaching everybody in Sweden, Kvarnström said.

But with the new mobile channel, Schibsted decided to go in the opposite direction. “We entered a new market: We looked at the small and medium sized businesses in Sweden because right now, we had a phone to allow geo-targeting.”

This allowed Schibsted Sweden to get specific and target people where they were physically.

“We could talk to people just living in Stockholm, or just living in a specific area in Stockholm,” Kvarnström said. “We could offer ads to real estate agents, car dealers, supermarkets, restaurants, clothing stores, and these are clients we had never worked with before.”

And luckily for Schibsted, Kvarnström said, local Swedish newspapers in 2012 and 2013 were lacking digital and mobile traffic, and they were primarily pushing print as their main channel for advertising.

Schibsted Sweden moved quickly to secure the market. During the past three years, the company has opened 16 offices with some 30 sales reps who only sell local sales in Sweden and who are competing against local newspapers, which, Kvarnström said, are continuing to struggle with mobile traffic.

“Sometimes I get the question, ‘Why did you do this?'” she said. “And I usually say ‘I have 12,529 reasons.’ That’s how many million Swedish krona the local advertising market is worth in Sweden. That’s about US$ 1.5 billion, and that’s 40 percent of all ad spend in Sweden. So why not shift into this great strategy?”

“For us, app traffic has been the source of everything,” Kvarnström said. “Our mobile traffic today is 50 to 75 percent from apps depending on which business we look into. With an app comes great technology possibilities. You cannot get that from a mobile website, you need to have an app. We work closely with our developers to try to drive even more traffic from our apps. For us, Facebook is not the best mobile channel because they go directly into our mobile web. We want native app traffic.”

Noting that with mobile, targeting is more difficult than with desktop because of the “cookie issues.” Schibsted Sweden targets people based on their physical behaviour.

“Where you are tells us a bit about who you are,” Kvarnström said. “For example, where you work. How often you visit an airport, in a period of let’s say, six months. Are you a frequent traveller? Where do you buy your groceries? With the help of the app, we can find out all of these things about you, and we can offer these targeting methods to our customers. We call this physical retargeting, so you target people based on where their physical location has been. We can collect this data and save it for up to six months. We do that with the help of geo-fencing technology.”

She said Schibsted then chooses places in Sweden that are of interest to their target groups.

For example, they did a campaign with Forex, one of the country’s largest banks, to encourage people to exchange their leftover foreign currency when they returned from a trip abroad.

Using the geo-fencing technology, Aftonbladet virtually fenced off an area around each of Sweden’s major airports and targeted ads were then used to reach the people who’d recently flown. Forex was very satisfied with the results, which exceeded their goals by far, and after this campaign, Kvarnström said they increased their spending with the Schibsted group by five times.

Acknowledging that some in the audience might think that while such a campaign is kind of cool, they might also be tempted to see it as limited in the amount of money it might bring in or how widely it could be used. Kvarnström quoted the Joker from Batman: “It’s not about the money. It’s about sending a message.”

“That’s exactly what this is,” she said. “This is an innovative thing to do. These types of technical innovations, these campaigns, have helped us win awards. We’re invited to media agencies. We’re invited to meet the marketing managers, the marketing directors. It allows us to speak at conferences about mobile innovation. These things are very good for our brand, and it shows we are a fun company to work with.”

In addition, she said these kinds of innovative ads are never sold as stand-alone, but rather as part of a larger package for a major campaign.

Read about how Schibsted keeps its ads “clean” and preserves the user’s mobile experience here.

Kvarnström’s third and final point was about the importance of knowledge and always trying to empower your people, though she acknowledged “this is probably the easiest thing to say but the hardest thing to do. You constantly need to be teaching your people and having them embrace new technology.”

She noted that Schibsted has a long history of bringing in knowledge early. “We hired our first mobile specialist in 1999, before we even had a sophisticated mobile website. Today, we have five mobile specialists who are only working with mobile ads: improving, innovating, teaching, and seeing the market.”

Kvarnström added that Schibsted regularly conducts internal education seminars and programs for their sales reps, their sales managers and everybody within their organization.

“We’ve had competitions, we’ve had seminars, we’ve had awards, just to talk about mobile and bring mobile awareness to our sales reps,” she said.

‘We want to be the go-to company for mobile knowledge’

Each year, Schibsted also conducts a large mobile-related survey, which they do together with one of the top universities in Sweden as an external partner. “This is also to get great publicity and to profile ourselves as “best in class” when it comes to mobile,” Kvarnström said.

“We just released this year’s survey about a week ago, and it’s about how to measure the effects of mobile advertisement,” she said, and added that the survey “gives us good press. It fills up seminar rooms, and that’s the thing we want – we want to be the go-to company in Sweden when it comes to mobile knowledge. All of these things we are doing we are doing to profile ourselves as the sales reps who know the best for mobile. And our sales reps are the kings and queens when it comes to mobile ads.”

In concluding, Kvarnström said that for Schibsted Sweden, going local did not canabalise any customers they already had. It was all new money.

Repeating how important it is to embrace new technology, she also urged participants to “dare to try crazy things and stand out in the crowd. That specific thing might not make you rich, but it’ll make you interesting. And I think with interest comes money. And last, but not least, make sure to empower your people. Empower your customers. Empower your partners. Be their go-to company.”