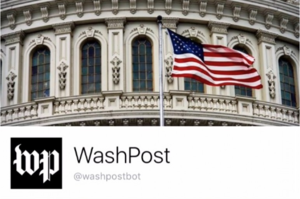 The Washington Post wanted to get its bot up and running early, to experiment and learn while there are not that many bots out there. It sees a long cycle of improvement as the bot learns from its interactions with users.

Joey Marburger, Director of Product, shared the philosophy with the World Editors Forum:

“We want our artificial intelligence to be a little dumb at first. It should learn a little bit, and it shouldn’t over promise or answer every single question. Sometimes not answering a question is better than answering it incorrectly.”

What level of interaction will you offer users?
At the start we want it to be very on demand. You can ask the messenger bot about a top story or a set of election results. We give people what they want, and then give them something extra they may engage with. We have a very different philosophy about how the experience should be for chat apps, and especially for news bots: most news bots tend to message you a lot. We found that experience to be really annoying because the bots aren’t even communicating in advance that they are going to do that. We made our bot 100% on demand. We won’t just start spamming you. We think that all conversations should be started by the user until that familiarity grows. Then two-way communication can happen, but it has to be personalised and in context. I don’t think anyone is really there yet.

What are you aiming for in terms of engagement?
The start of a message with the bot should be the start of a story with that user. We’re hoping for more conversation over time in the right way. At the moment, it is pretty basic, but at least there is a level of banter happening – that could get more personal over time. That is what we hope for over time and the only way to achieve that is to start having conversations with people.

How much work went into building the bot?
It is not a huge investment, we already have all the things that power bots, and the platform itself is not really that hard, getting the experience right though is hard. That’s where the larger effort is. So it is worthwhile to get out there and experiment, to learn how our readers interact with it; what people want; what they don’t want; and keep iterating this until it really takes, if it does.

How big is the team behind it?
We started with two engineers building separate prototypes; then we combined them together. One engineer built the experience and one product manager helped oversee it to make sure it is compatible with Facebook. Apart from a small technical problem on our side, it was all pretty simple. We’ll add new capabilities to it almost every two weeks. The first one consists of making Olympic data available in the bot so that users can search the gold medal count for US, for example. In terms of moderation, that is possible but not sustainable if a lot of people are using it. Instead, we’re working on a tool to train the bot, which means a person could go in and code in what the response should be so the bot can include that response.

What are the challenges in writing the script?
Language processing: to be able to have someone message a subject and send back the relevant top story is not very hard, but if someone asks a very intricate question it gets a little harder. In the bot right now, you can ask an open question, but when analysing it we pull out a keyword, search our news and return a story. Depending on what the question is, the results might not be very good. Analysing the semantics of a person’s question or statement can get a little hard – and also, to do that quickly.

Do you think newsbots will catch on?
I think so if the experience is good and obviously if the content of the messages is good. That is a big differentiator for us, as our journalism is fantastic. It is not so much a pure messaging bot it is really just the whole concept of conversational user interfaces: more streamlined interfaces on the web are already growing really rapidly. We look at that whole portfolio when we think about bots, what we are really working on is conversational interfaces.

Do you think your readers may eventually move from the Washington Post app to Facebook Messenger bot?
We want them to be everywhere; we cannot double-down on one thing. We have never really done that, we’ve always been right there on a new platform and new experience. Bots are an opportunity for us to find new readers that don’t go to traditional means all the time, or to provide current readers another way to experience our journalism. We want to grow the smaller areas if we think it’s worth it, and we think chatbots are worth it.