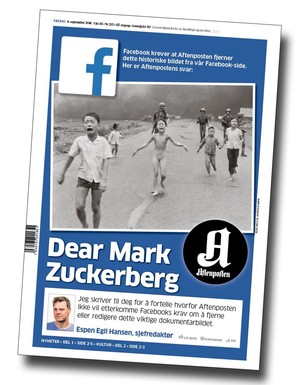 The newspaper first received a message from Facebook asking that they remove the picture, which was published as part of an article about historically significant photographs, because of the nudity it includes. Soon after, before Aftenposten had time to respond, Facebook deleted the article from Aftenposten’s Facebook page.

Espen Egil Hansen, editor-in-chief of Aftenposten, accuses Facebook for restricting his room for exercising his editorial responsibility as news editor: “I think you are abusing your power, and I find it hard to believe that you have thought it through thoroughly.”

Hansen points out that Facebook’s policies could, in theory, restrict reporting from ongoing conflicts: “Would you once again intercept the documentation of cruelties, just because a tiny minority might possibly be offended by images of naked children, or because a paedophile person somewhere might see the picture as pornography?”

He makes a couple of concrete proposals on how Facebook could alleviate such concerns: by having geographically differentiated guidelines and rules for publication, and distinguishing between editors and other users. But what is ultimately needed in his view is a “comprehensive review” in the way Facebook operates.

Writing for the Guardian, Richard Ackland argues that publishers are “too late” to realise the power Facebook has with regard to their content, and that it’s “going to get worse as more and more news curation gives way to the march of the algorithms”.

At the end of August, Zuckerberg made headlines by saying that Facebook is not a media company, and would not become one. But in reality, the two are inseparable these days, Ackland says.

This is likely to intensify the discussion around power dynamics between Facebook and news publishers, Facebook having become a major source of news.

UPDATE: Following widespread criticism, reversed it’s decision, saying: “Because of its status as an iconic image of historical importance . . . we have decided to reinstate the image on Facebook where we are aware it has been removed.”