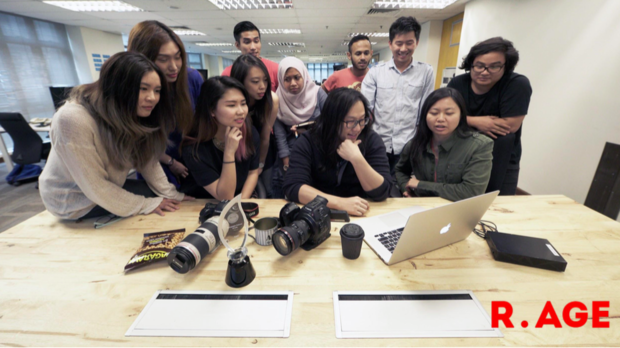 R.AGE’s team of young journalists had been producing international award-winning youth-centric journalism for over a decade, when it decided, in June 2015, to shake things up a little: keeping up with its 16-25-year-old audience, it turned its operation into a full-blown video reporting initiative.

The relaunch was certainly not an easy ride as there was practically no budget at first.

R.AGE TV’s team was determined to make it work and struck a deal with a camera manufacturer, receiving equipment in exchange for producing a series of native advertisements. A video series on Malaysia’s increasingly popular cheerleading culture generated so much traction that it attracted enough funding to take the new video first platform off the ground.

“I believe many youth teams in newspapers struggle to get any kind of real recognition,” Editor and Executive Producer Ian Yee said in response to winning the prize, “we’re often seen as just a bunch of plucky kids in some corner of the newsroom who aren’t quite real journalists, but this award helps us break that stereotype.”

Contrary to popular belief, R.AGE proved that young Malaysians care about news. Clickbait is an absolute no-go for the platform. “We were determined to ignore our video hit count – and all our competitors’ viral videos. We would pursue gritty, hard-hitting stories on “human” issues, make it interactive and “campaign-based”, and make sure there’s a cause for the audience to get behind with each documentary,” Yee said.

That’s why, it took a rather risky strategy of offering more serious documentary-style videos of 10-15 minutes, each one accompanied by a long-form feature story, packaged together on a standalone (mobile responsive) website with other interactive and social functions that would encourage audience engagement and sharing.

Coverage includes a series on a deadly disease threatening an indigenous community in a rural village; another series features Malaysia’s World War II survivors going back to the places they experienced the war, and in an undercover investigation “Predator In My Phone” R.AGE’s young journalists expose child sex predators that use mobile chat apps to connect with children. This impressive coverage garnered 1.5 million views, becoming one of The Star‘s most-watched videos of the year.

The World Young Reader Prizes are part of WAN-IFRA’s efforts to recognize, encourage and disseminate innovative ideas and thinking to help build stronger and vital news media. World Young Reader Prize-winning strategies are celebrated and shared as they benefit not only the media companies and their young audiences but also society as a whole.

The other top prizes are being awarded in several categories:

– Schleswig-Holsteinischer Zeitung of Germany was top winner in the Public Service category for its initiative “Welcome to Germany“: Language Training for Refugees with the Newspaper that uses classic newspapers in education strategies supported by other resources to creatively help three age groups of refugees learn German language and culture.

– Polska Press Group of Poland won in the News in Education category for their initiative #juniorlab, a transformation of its news in education program to offer multimedia lessons in using modern tools to do journalism (with prizes for success).

– Het Belang van Limburg of Belgium won in the Editorial category for a special focus in its “We solve your problems” feature on young people, opening up new relationships in the process.

– Lausitzer Rundschau of Germany was top winner in the Brand category for Planbar, a multi-faceted, multimedia and profitable initiative that helps young people about to enter the job market.

– Uitgeverij Young & Connected of The Netherlands won in the Digital First special category of the Netherlands. The team of its 7Days media brand that  focuses on news for teenagers created a news app relying on cheap or free resources and featuring a creative way to make money.

Other awards went to news publishers in France, India, Germany, Hong Kong (China), The Netherlands, South Africa, and the United States. Details about all the winners can be found here.

The World Young Reader Prize is supported by the American Press Institute (API), CCI, The Harnser Group, and the Newseum. It is one of WAN-IFRA’s global youth and news media initiatives. To find out more about the other elements of this work, see www.wan-ifra.org/newsliteracy or contact Aralynn McMane, Executive Director for Youth Engagement and News Literacy at aralynn.mcmane@wan-ifra.org.